Florence might have a lot of interesting things going on in the modern era, but there’s no doubting that the main draw-card for tourists visiting this Italian city is the history, art and architecture. It was a centre of European trade and finance, birthplace of the Renaissance, and one of the richest cities in the world at its peak.

Florence is a truly beautiful city, and wherever you are in the UNESCO heritage listed centre, evidence of its glorious past surrounds you. “David” by Michelangelo is one of the most recognisable sculptures in the world. It was created between 1501-04 and was originally located in Piazza della Signora.

In 1873, David was moved to the Academia Gallery, where he stands today (a replica stands where the original once stood). The technology behind the conservation and restoration of the statue is fascinating. Just one of the many elaborately designed churches in Florence. There are a vast array of statues and sculptures dotted throughout Florence’s historical center. Piazza della Signora adjoins the Palazzo Vecchio, which was historically the most politically important building in Florence. Today the majority of Palazzo Vecchio is home to the Uffizi Gallery (Florence’s main art gallery), however it still houses the office of the mayor of Florence and is the seat of the City Council. Loffia dei Lanzi is a building on the corner of Piazza della Signora. It contains many statues, and is also just a place for people to hang out in. Below is Benvenuto Cellini’s “Perseus with the Head of Medusa”. As with many old European towns, there is forever restoration work being performed on various old buildings. Ponte Vecchio is a medieval stone bridge spanning the Arno river. There is evidence to suggest that a bridge existed at the site since the times of the Roman Empire. Amazingly, this was the only bridge in Florence that wasn’t destroyed by Hitler’s retreating army on 4 August 1944. Why? Nobody knows for sure.

Historically home to many shops with various traders selling useful goods and food, today the shops still exist but peddle overpriced jewellery and tourist trinkets. I certainly wouldn’t be buying anything from here, but it’s well worth checking out. 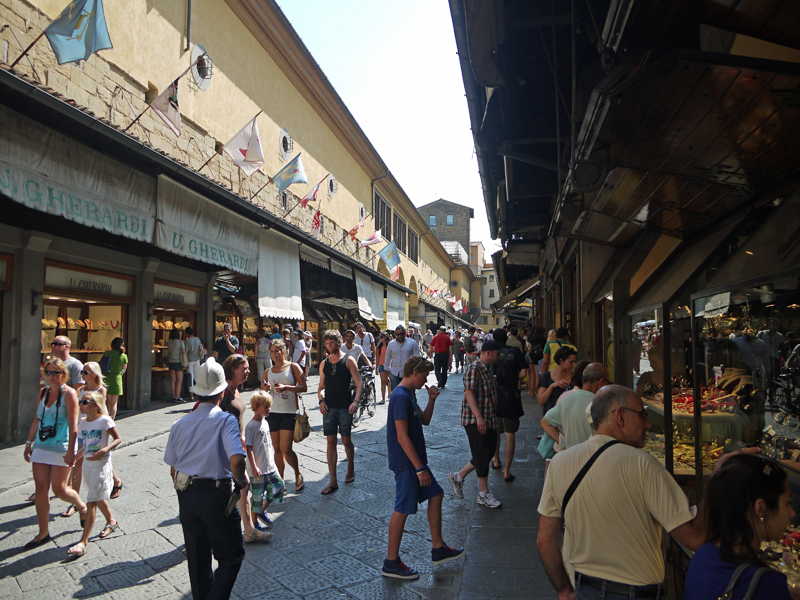 Florence is one of those cities where it really is perfectly acceptable to do all of the touristy stuff. There’s a reason why it’s so popular – it’s fascinating and beautiful.

One thing that I did find odd about Florence was that when it came to its old squares and historical buildings, it was quite hard to photograph. Obviously some of it came down to my skill, as I was at the time (and still am) learning the tools of the trade. Regardless of that though, I’d never been in a city where no matter how much I tried, I just wasn’t able to quite get the shot that I wanted. A challenge for next time I suppose!