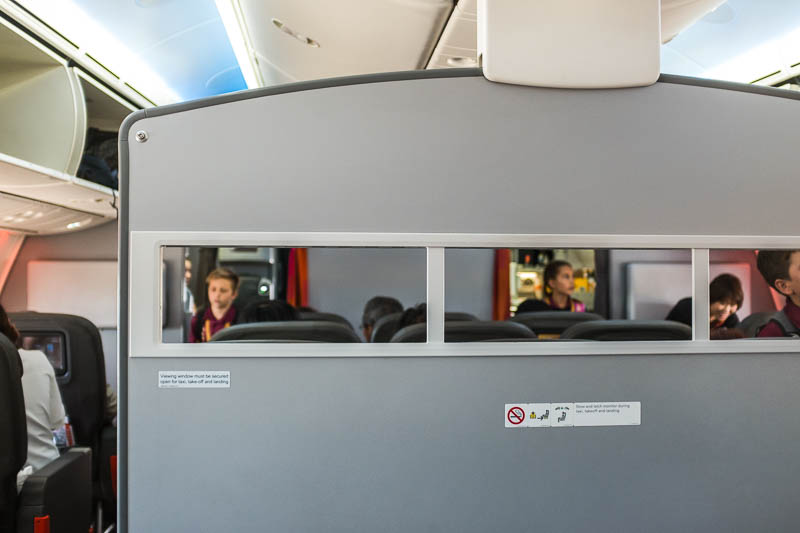 Jetstar operate up to seven flights a week between Cairns and Tokyo, depending on the time of year. The plane that’s currently used on the route is the Boeing 787-8 Dreamliner (“Dreamliner”). Having previously flown Jetstar long haul to Ho Chi Minh City from Melbourne in Business class on the Dreamliner, I was interested to see how a similar length flight in Economy would fare.

As I was flying from Melbourne, I didn’t need to worry about checking in at Cairns. The international terminal at Cairns is a small one, but it seems to be adequate for the job at hand. Observing those who were checking in at the counters it didn’t look like there were any hassles for anyone. Online check-in is not available for international Jetstar flights to or from Australia. Flying Economy means no fast track through security or lounge access. Also note that there aren’t too many food options at Cairns’ international terminal – grab something to eat beforehand if you can.

I had no complaints about the service of the staff at all stages of my flight experience. Staff were friendly and helpful, but not overbearing.

The Jetstar Economy cabin on the Dreamliner that flies from Cairns to Tokyo features 314 seats, in a 3-3-3 layout. There are enough flight attendants around so getting the attention of someone should you need assistance isn’t an issue. Colour wise it’s orange, and varying tones of grey, in line with Jetstar’s branding. When it comes to cleanliness, everything nice and clean.

The leather seat has dimensions of about 76cm x 43cm, on the smaller end of the scale but in line with what you find on most low cost airlines flying this sort of distance. Like any economy seat, it doesn’t recline that far back. There’s an adjustable cushioned headrest which is handy when you want to get some sleep, and not often found on low cost carriers.

There are small armrests, and a leather pocket sleeve at the back of the seat in front to place a few things. There’s not much space to get work done with the tray down if you’ve got a laptop, but for a tablet sized device it’s possible to get some productive stuff done.

Unlike a lot of low cost carriers, Jetstar’s Economy seats do have seat back screens (22.9cm), however to make use of the entertainment you’ll have to pay AUD$10 to access it. Entertainment is also included with some of the fare bundles that you can pre-purchase before your flight.

Food isn’t included with Jetstar’s base Starter fares, but you can pre-purchase a meal, or choose from the on-board menu. If you add one of the bundles to your fare you’ll generally get a meal or meal voucher included. Food options include things like salads and sandwiches, noodle bowls and a variety of snacks and drinks – alcoholic and non-alcoholic. If you choose to pre-purchase the options are similar to what you find in Qantas economy. I can’t vouch for the quality of the food on this particular flight as I purchased a sandwich, chocolate bar, and water from the airport to bring on board.

No amenities are included with the base Starter fare but you can pre-purchase a comfort pack for AUD$10. This includes an inflatable neck support pillow, toothbrush and toothpaste, earplugs, socks, eye mask, and Ecothread blanket.

Overall I enjoyed my Jetstar flight from Cairns to Tokyo. When I purchase a seat on a low cost carrier the main thing I’m looking for is a good flight price, friendly service and a comfortable seat. All of the other extras I can live without. By this measure, this Jetstar flight impressed me and I’d happily fly them to Tokyo again.