Hvar Fortress is one of the many discoveries to be found in the old town of Hvar, Croatia.  Amazing beaches, great food and a vibrant night life being amongst the others.

The Cathedral of St Stephen, at the end of the central square of Hvar (the Pjaca), is a Gothic cathedral dating back to the 14th century, and includes a 17th century bell tower.  A Christian church originally occupied the site from the 6th century, and worship has occurred on the site ever since. On our way to Hvar Fortress “Fortica Spajnola”, there are many cobblestone lined, winding narrow streets and beautifully preserved old buildings. There are various sculptures dotted throughout Hvar.  This one, located outside of the city’s Benedictine monastery, is of Renaissance playwright and poet Hanibal Lučić. Leaving the main part of the city and heading up the passage towards Hvar Fortress, there are many opportunities to view Hvar and it’s stunning coastline from above. There are many churches and chapels in Hvar.  Slightly off the main path was this small chapel. The words “Zdravo Marijo” a.k.a. “Ava Maria” or “Hail Mary” were inscribed above the entrance door. Finally, we reached Hvar Fortress.  The original fortress dates back to the 1st millennium BC and was built by Dalmatian Illyrians in the days of the Byzantine Empire.

The current fortress, “Fortica Spanjola” (“Spanish Fortress”) was built in the 16th century during Venetian rule to protect the prosperous city and port below.  The “Spanjola” in the name comes from the many Spanish engineers who helped construct it. The Fortress played an important part in protecting Hvar from Ottoman attacks in 1571. 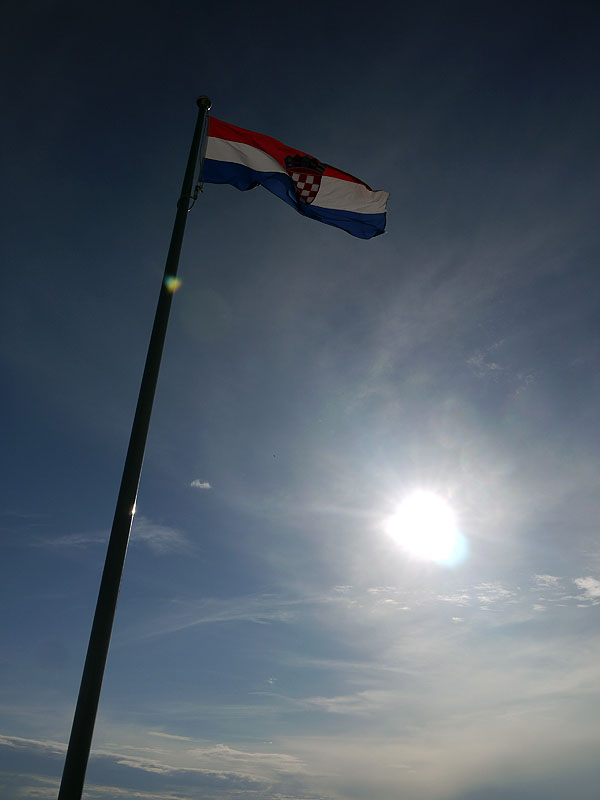 The Fortress has been restored, and is in very good condition.  As much as I hate it when touristy things are added to historical sites, I would be lying if I didn’t say that enjoying a drink here, with the amazing view wasn’t a very relaxing head clearing moment – it also provided some much needed rest after the uphill walk.

You can walk through a lot of the Fortress’ interior, and there are a number of artefacts dating back to the Middle Ages to look at.