The final episode of 30 Rock aired on NBC last week, and with it, we say goodbye to a treasure-trove of witty (and not so witty) comedy and subtle (and not so subtle) pop culture references.  7 seasons and 137 episodes certainly wasn’t a bad effort for a show that, despite its critical acclaim and awards, never rated that well and certainly never aimed for the mainstream.  Kudos goes to NBC for sticking with it, a rarity in the world of US network television these days (FX’s Louie being another notable exception).

30 Rock the television show might have ended, relegated to the land of late night reruns, however the skyscraper that lent its nickname to the show – The General Electric (“GE”) Building at 30 Rockefeller Plaza (“30 Rock”) remains very much alive. 30 Rock is part of the Rockefeller Center, which is a complex of 19 art deco commercial buildings covering 22 acres between 48th and 51st street, spanning the area between 5th and 6th avenue in New York City.  The Rockefeller Center is a truly mind-blowing complex and when I saw it for the first time; I can say that the oft overused word, awesome, was appropriate in its literal sense – it truly does inspire awe. Completed in 1933, 30 Rock is the centrepiece of the Rockefeller Center at 70 stories tall (266 m).  The building has for a long time been referred to as 30 Rock, however it was officially called the RCA Building until 1998, when GE took over RCA.  One of 30 Rock’s claims to fame is that it is the headquarters of NBC, and home to most of NBC’s New York studios.  The Rockefeller family’s offices are on the 54-56th floors. The famous photo of workers having lunch while sitting on a steel beam without safety harnesses “Lunch atop a skyscraper”, taken by Charles C. Ebbets in 1932 was taken during the construction of 30 Rock. At the front of the Plaza, on the sidewalk are street vendors selling food and other goods. I had never actually seen 30 Rock when I visited the building.  The reason for visiting (apart from the fact that the Rockefeller Plaza with 30 Rock as the centrepiece, is pretty hard to miss when walking along that part of 5th avenue) is because I knew it from many movies.  In 1936, the lower promenade had an ice skating rink installed, and it has been used in scenes for countless movies over the years.  It’s one of those places that, even though you’ve never been before, seems very familiar. It also didn’t hurt that Lego’s flagship store and Nintendo World are located here too! The Rockefeller Plaza is full of public art, the largest and most impressive piece being the Statue of Atlas which was installed at the front of the centre in 1937. 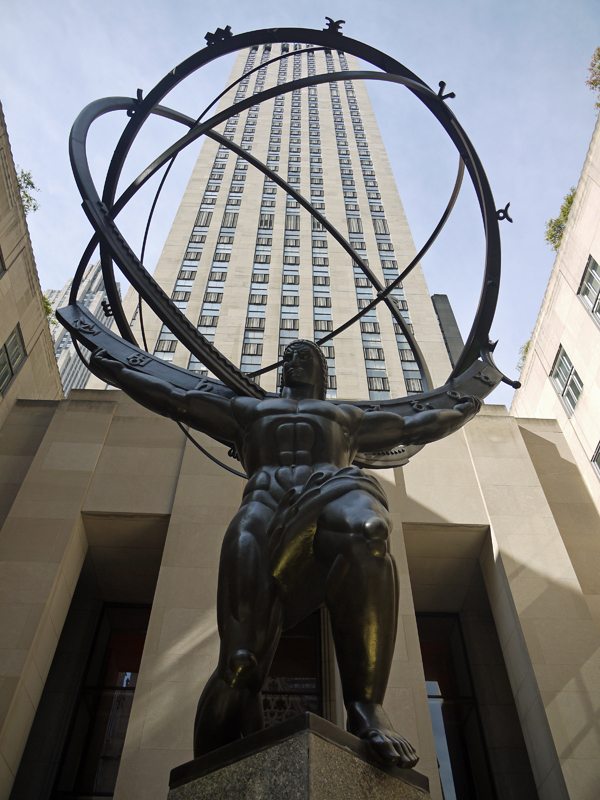 The other famous building that is part of the Rockefeller Center is Radio City Music Hall.  Completed in 1932, it was originally used to showcase movies and stage shows, but since 1979 has been used by touring performers and for special events, such as the Grammys and Tony Awards. Whether you’re a fan of 30 Rock the television show, 30 Rock the building, or both, I hope you enjoyed my mini tour of the Rockefeller Plaza, and maybe learned something new.

Do you have any interesting 30 Rock facts you’d like to share below?  I’m an information sponge, and would love to hear what you have to say about both the television show and the building.