MELBOURNE | Bar Liberty Fitzroy is the brainchild between Banjo Harris Plane (ex-Attica), Michael Bascetta (ex-Attica), Casey Wall (Rockwell & Sons) and Manu Potoi (Rockwell & Sons).  An impressive and diverse background that had a lot of people wondering what the result was going to be. After all, how do you reconcile Attica and a Double Patty Smash? That’s the thing about work in general though, people seem to always want to define you by the last thing you’ve done. Before he was flipping double patty smashes and frying up some of Melbourne’s best fried chicken, Wall was of course in the kitchen at Cutler & Co and before that NYC’s Michelin starred The Spotted Pig. Potoi meanwhile was plying his trade at Stockhouse and Attica before his Rockwell & Sons days. All of a sudden things start to make sense. What is Bar Liberty all about though? Named after an obscure Star Wars Episode III, Revenge of The Sith quote, Bar Liberty is, simply put the kind of bar that the owners like to hang out in. What this means for diners is a minimalist space with great food and drinks. When one of the owners is the The Age Good Food Guide 2015 Sommelier of the Year and former Gourmet Traveller Sommelier of the Year you know that the wine list is going to be fantastic. Harris Plane has put together a well thought out list of around 130 wines that run the gamut of styles, countries, ages and price ranges. Whether it’s a 2015 Sassafras Savagnin Ancestral from Canberra, a 2015 Blaufränkisch from Austria or a 1968 Calvet Nuit St Georges from France there will be something to suit on offer. Some of this stuff is super rare, available only at wine auctions and from wineries that no longer exist. Even if you don’t know what you want, Harris Plane’s skill means that he’ll zero in on just the right wine for you after a few quick questions.

Attention to detail has also been given to the beer list, which is a focused selection of excellent craft beers and the spirits range too. You can even drink bourbon from a model 1956 Ford Thunderbird if you like … because why not? Cocktails are more than an afterthought too and anything but classic. Take for example the “Millions of Peaches, Peaches For You” which consists of lemon thyme smoke charred peaches mixed with Bourbon, orange bitters and lime juice. Inside the globe on wheels are a few bottles of wine (and cider when we visited) on ice. It’s a novel way to offer a drink to those who just arrive and it fits in well with the ethos of Bar Liberty. All the stuff you like about fine dining without all the stuff you dislike. Why shouldn’t the wine cart be a bit of fun? Everything exhibits attention to detail, from the cutlery to the beautiful Gabriel-Glas wine glasses (Bar Liberty is anything but pretentious but I challenge you to read the description of these glasses and not laugh). Moving onto the food and when Potoi describes his favourite dishes on the menu you can feel the passion and excitement breaking through his dulcet tones. The food ranges from simple to complex, the ingredients familiar to unknown with Wall flexing the fine dining technique muscles he’s been resting for the past few years.

This was a great way to start the meal. Light crisps that exhibit none of the oiliness usually present in crisps with a generous dollop of mussel dip topped with specks of lovage. Silky smooth with a nice crunch. This was one of the highlights of the meal. The cured scallops were perfectly textured with the fermented buttermilk and cavolo nero adding a slight bitterness and creaminess to eat mouthful. The burrata was the highlight of the night. Beautifully creamy, on the initial cut the cream oozed out into the burnt garlic, which was akin to the black garlic you find in ramen. The soured cucumber cut through the garlic and the creaminess. Each mouthful was indulgent and delicious – probably the best thing I’ve eaten all year. Gabagool is the Neapolitan term for capocollo (you might recognise the word from The Sopranos). Nothing fancy here, just thin slices of brilliance.

These XO Pippies were also fantastic. The pippies had a nice chilli kick to them and the sauce was tangy, spicy and salty – mopping it up with the Chinese doughnuts created mouthfuls of delight. This dish was another example of varied flavours working well in unison. The Berkshire pork was slow cooked – the fat melted in your mouth and the sauce had a sharp tanginess to it, with the labne cutting through the fattiness. We thought that this simple dish would fail to hit the highs of some of the others but it didn’t. The potatoes were soft and creamy on the inside and perfectly crispy on the outside. The fermented chilli had a home-made Sriracha like quality to it and was very addictive. We thought we’d finished eating but when we saw the GLT come out to another table we had to add it to our order before getting dessert. A very simple riff on a BLT, with the bacon replaced by dehydrated chicken skin. There’s crunchy like the potatoes we had before and then there is next level crunchy which is what this chicken skin was. Another winner and quite different to the rest of the dishes on the menu. 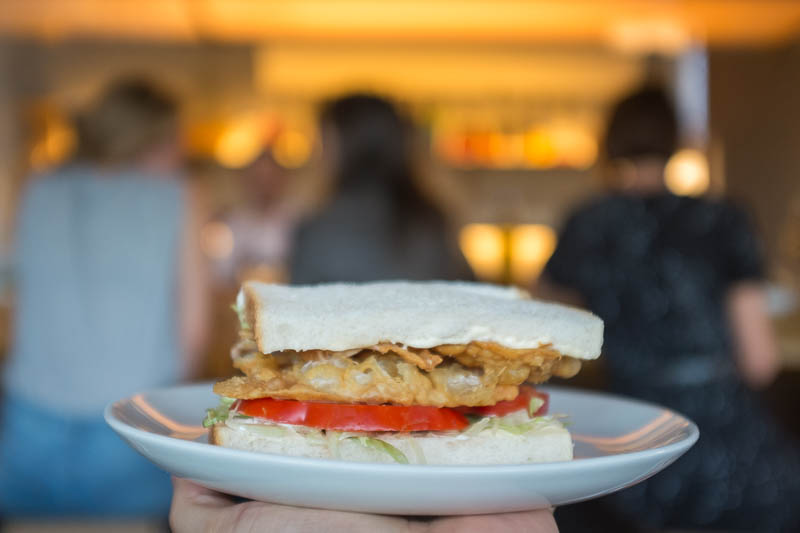 We were almost thankful when this dessert didn’t quite hit the mark as it meant we didn’t have to write a review which was filled with nothing but praise. Texturally it was fantastic, with the acidity of the firm spiced plums balancing nicely with the liquid goat’s milk and the icy granita. What we all agreed on was that there was too much tarragon here. It was so overpowering that it gave the entire dessert a strong aniseed flavour. Everyone at the table liked tarragon, so it could only have been a matter of too much being used. Tone down the tarragon and this could be a winner. This dessert was fantastic. Soft, melt in your mouth rich chocolate infused with salt and bourbon. Simple and delicious. 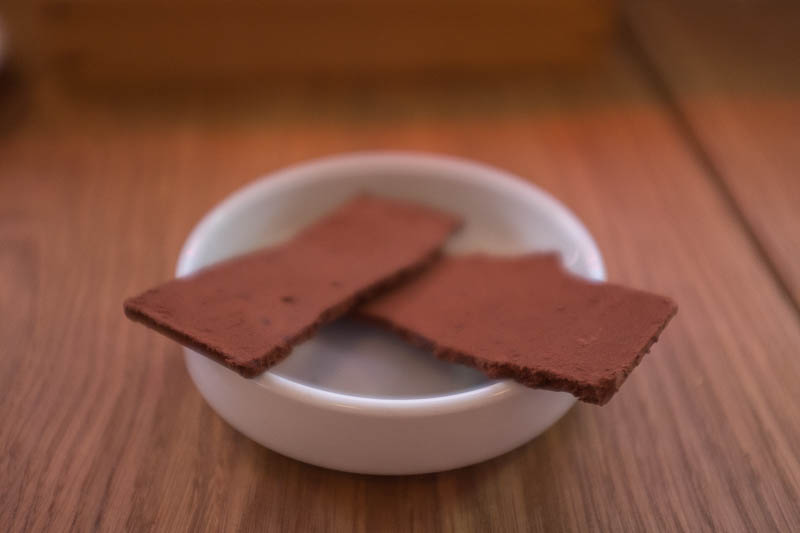 Harris Plane recommended this 1972 Barossa Vintage Port for the chocolate and some umeshu from Japan for the plums. Both not just complimented, but enhanced the desserts. It’s only a month old but Bar Liberty is already kicking goals. In fact we visited twice in one week. Brilliant drinks and exceptional dishes that are executed with finesse. Service flows like at a venue that’s been open for a lot longer and everything comes together just right. With a rear courtyard and an upstairs space sitting unused at the moment, one can only imagine where these guys will be taking things next. It’s only April, but Bar Liberty is already a contender for 2016’s best new opening in Melbourne.