The Best of Bristol, A Weekend Away

BRISTOL | Bristol, England offers something for everyone. From music to art, and history to booze, Bristol is an excellent choice for any visitor to the United Kingdom. For centuries, the port side city has been one of the most important maritime cities in the world and today, Bristol is creative hub and a huge proponent of local businesses.

You can reach Bristol in 2.5 hours from London by coach using the National Express or 2 hours by train from London Paddington. Bristol can also be tied into a day trip Bath, a city for its famous hot springs and beautiful architecture. Bristol itself is good starting point for a country walk through the rolling green countryside of Somerset and Gloucestershire. Bristol has many sides. Clifton is the upmarket neighbourhood featuring posh cafes and beautiful Georgian architecture. The opposite side of town is gritty and dotted with street art including a few pieces by the famous Bristol born (allegedly) street artist Banksy. The University of Bristol also provides a youthful vibe about the city. To give you an idea of its uniqueness, Bristol was the first city in the UK to offer a city-wide local currency, the Bristol Pound. The idea is that the Bristol Pound will encourage people to shop in local, independent stores versus the major high street chains.

Below, and in nor particular order, are The City Lane’s top picks for Bristol: 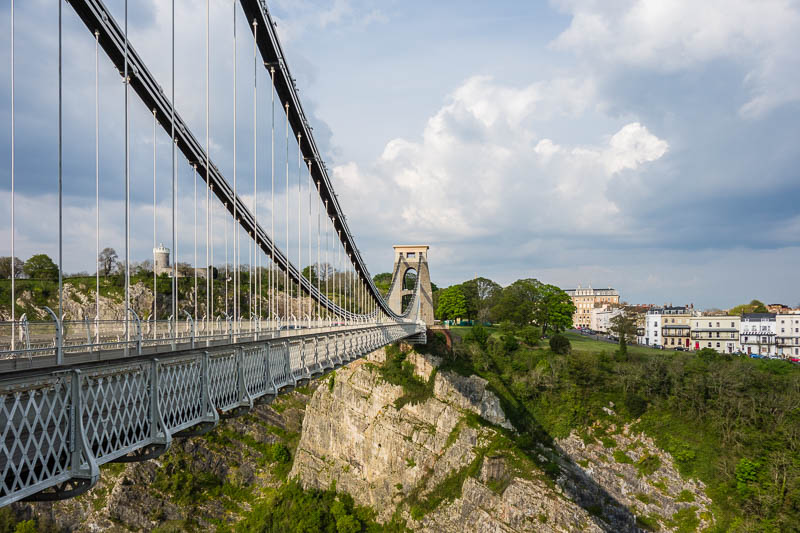 One of the world’s great bridges in located in Bristol. Overlooking the Avon Gorge, the Clifton Suspension Bridge connects the stylish area of Clifton to Leigh Woods in North Somerset. Built by Isambard Brunel and opened in 1864, the Clifton suspension bridge has become the symbol of Bristol. All over Bristol you will find references to Brunel, of the 19th century’s engineering geniuses.

Enjoy a stroll around the beautiful and hilly area of Clifton and make your way across the bridge. For excellent views of the bridge, we recommend having a drink at the terrace of the White Lion Bar & Terrace. The SS Great Britain, designed by Brunel, is a former passenger steamship which has been converted into a museum (Adult ticket £14.00, Children’s ticket £8.00, Family ticket £37.00). When it was launched in 1843, it was the largest ship in the world. The ship features some engineering firsts which powered it across the ocean faster than any ship had travelled before. The ship has been restored allowing visitors an opportunity to experience the way immigrants would have travelled to the Americas and Australia back in day. History truly comes alive on board the SS Great Britain.

As its name suggests, the Grain Barge is a former working barge that has been converted into a watering hole. It offers an extensive range of beers, ales, and ciders. The Grain Barge is moored next to the SS Great Britain so it’s an excellent choice to rest and enjoy a beverage after visiting the museum.

Stokes Croft is a must visit area north of the city centre. This vibrant area has become an outdoor art gallery of sorts with its endless street art and murals. It’s an excellent area for nightlife and people watching. The two main roads, Cheltenham and Gloucester, share no resemblance to your standard British high street. The area’s residents are strong supporters of independent shops and galleries. Zerodegrees has been part of UK craft beer scene since 2000 and offers a huge selection of core and rotating speciality beers. After walking around hilly Bristol we really enjoyed our stop for a few beers on the terrace. Their menu is broken down into core, speciality, and vintage beers beers. If we didn’t have a coach to catch, we would have stayed a bit longer working our way through the extensive beer list. Tucked down a residential alley way, this old Georgian cider house serves up some potent tipples. Named the “Exhibition”, the Coronation Tap’s signature cider is only served in half-pints. The Coronation Tap is so well-known that its namesake was inspired a new word in Bristol-speak. Now “Corried” means to have a good time. The Coronation Tap may look like an old style pub for the outside but it is only open in the evenings. It was just opening at 7:00pm when we went, but the noughties hip hop was blaring and the half pints already poured awaiting the big night time rush. Whether you are lining the stomach for an upcoming cider session or recovering from the night before, Three Brothers Burgers is not to be missed. It located on converted boat on Bristol’s waterfront. Even on weekends they offer a £5.00 lunch consisting of a burger and fries. By chance, we stumbled upon the newly opened Yatta Sushi House on Nelson Street. Steps away from Bristol’s major shopping area, it offers a variety of Japanese food and sushi in a space that has the feeling of a Singaporean Hawker centre. The sushi isextremely fresh and the tempura is delicious. In addition to a la carte items, Yatta Sushi offers a very well-priced all you can eat menu. The Bristol location of the boutique wine hotel chain, Hotel du Vin is one of the most pleasant stays we’ve ever had (rooms from £134.00 per night) helped along by the very helpful and friendly staff. The building itself is a converted sugar house steps away from the historic Bristol docks. Instead of a number, each room is designated as a particular wine. Our room featured a bathroom with an amazing walk in shower and claw foot tub. The breakfast offering was superb, the perfect fuel for a long day of sightseeing.