Cobb Lane Yarraville is a “cafe and artisan bakery” from pastry chef Matt Forbes, formerly of Vue de Monde, Maze and Mr Hive. Prior to arriving in Melbourne, UK born Forbes worked under Raymond Blanc and Michel Roux. I’d heard good things about Cobb Lane’s UK inspired menu and, of course the pastries which have found their way onto many a menu around Melbourne so was keen to head to the unexplored (to me that is) suburb of Yarraville to see what it was all about.

The place is very small, seating only 16 inside and 8 outside – for a table of 4 on a Sunday morning there was a half hour wait. Our name was put on a list that was hanging on the front door and we all had a wander around the streets of Yarraville checking out the area, which had some nice little shops and cafe as well as lots of families, singles and couples with dogs – so many dogs! It was a nice half hour of wandering around and when we returned our table was ready. Coffee comes from South Melbourne roasters Clement Coffee. I ordered a flat which was a decent tasting, inoffensive house blend that hit the spot, the “Pony” blend to be precise. A seasonal filter was also on offer. 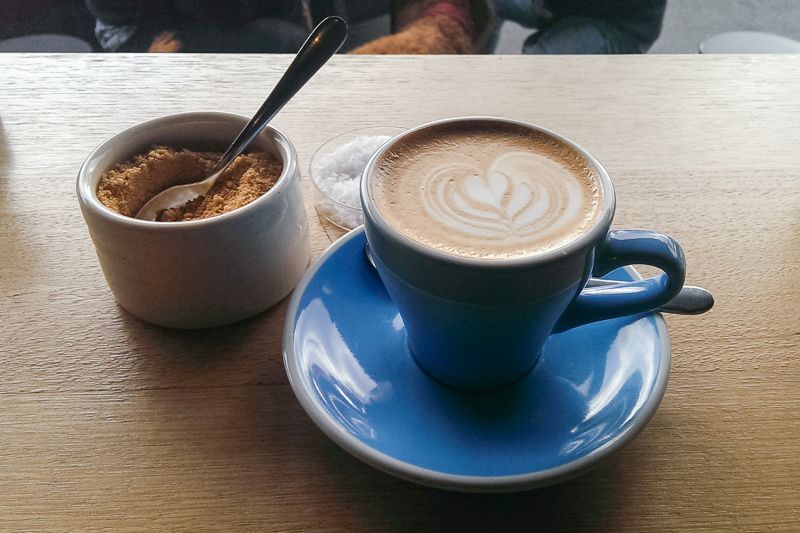 The menu contains a concise collection of British inspired dishes. I’ve been to a few places that do British breakfasts however they often seem to be stuck providing the stereotype of what British breakfast is supposed to be. I was pleased to find simple, modern takes on UK classics with a focus on local, quality produce on the menu at Cobb Lane – items that are more in line with what you’ll find at good breakfast spots in the UK these days and what I remembered from my time living in that part of the world.

My wife and one of my friends ordered this decent sized sandwich that consisted of slow cooked pork neck, spinach and aioli in between two slices of sourdough. They both enjoyed it and when I took a bit of my wife’s sandwich I was also impressed. The pork fell away in my mouth and the aioli was not applied too liberally which personally is how I like it – it’s there, but doesn’t overpower everything else with the taste of garlic. I almost chose this dish but went for the British Breakfast instead. The friend that did order this was very happy with her choice. I tried one of the croquettes which was nice and fluffy on the inside and crisp on the outside with real nice flavour to it. I do like a “full English” breakfast and the British Breakfast on offer at Cobb Lane sounded too appealing for me to pass up. Everything tasted great, and I was especially brought back to Britain by the presence of the thick cut bacon (from local British smallgoods producers Pacdon Park) and the scotch egg which wasn’t too heavy and had an egg with a perfectly gooey yolk inside. A really great take on the classic British Breakfast and no where near as heavy as the photo or ingredients would suggest. There were a variety of pastries in the display cabinet below, including a very tempting salted caramel, chocolate and peanut butter slice however I couldn’t go past the famed doughnuts that were sitting atop the cabinet. These things were selling like hotcakes and the display was being cleared faster than it could be refilled. I’d tried a lychee & raspberry jam with rosewater custard one a few months back at Dead Man Espresso, it being one of the cafes that Matt Forbes supplies pastries to, and was very impressed. The two flavours below were just as tasty. The lemon and lime curd doughnut had great flavour and was neither too sweet nor too tangy and the peanut butter jelly doughnut got the flavours right without being too salty. The doughnuts themselves were light and fluffy on the inside and crispy on the outside. Perfection. Cobb Lane had been on my to do list for a while and, while I went there for the sweet options, I was very impressed with the British inspired savoury dishes on offer. Despite the fact that the space is small and very busy, the staff were on top of things the whole time and I left very satisfied. There was also a small range of jams and spreads and breads to take away too. For those who don’t live in the area, Cobb Lane justifies a visit to Yarraville.