Estelle Bistro Northcote is one of those places that’s been on our list of “places to try” for a long time. Friends have been and raved about it, and we’ve never heard a bad thing about the place but for some reason we never got around to visiting until now. As you can imagine our expectations were very high, especially given our excellent experiences at owner Scott Pickett’s other restaurant, Saint Crispin.

What was Estelle up until late last year is now in fact 2 restaurants. The casual Estelle Bistro occupies the space that housed Estelle for the past 4 years with the fine dining moving next door to become Estelle by Scott Pickett.

The space is much more modern than it used to be, with the dated tiles and colour scheme making way for exposed-brick walls and recycled timber finishes. It’s dark and moody inside and opens up outside into a small, welcoming courtyard. Compared to the fine dining, set menu of Estelle by Scott Pickett, Estelle Bistro is a causal affair with a range of simple modern dishes available either individually or as part of a set course. If you’re not in the mood for an entire meal, there is also an extensive range of snacks and charcuterie on offer. The food is simple, seasonal and accessible, with the occasional fancy flourish here and there.

While a decent range of craft beers, spirits and other drinks are available, the highlight at Estelle Bistro is undoubtedly the wine selection, which has an extensive but not overwhelming selection of wines from Australia and overseas. When we visited as part of a group of 10 on a Sunday, instead of choosing to dine from the menu we instead went for the Seasonal Sunday lunch. These lunches started last year and offered diners the chance to experience a seasonal inspired menu of 3 courses along with a glass of wine for $50. These were hugely successful and have thankfully continued at Estelle Bistro.

Writing about bread and butter might seem frivolous however a restaurant’s attitude towards the bread and butter that it serves at the start of a meal often speaks volumes about the food to come. In the case of Estelle Bistro, the bread was a combination of white and grain sourdough which was light and fluffy with a crunch crust. The attention to detail in the way the bread was presented was a great touch, as was the option of ? along with butter. 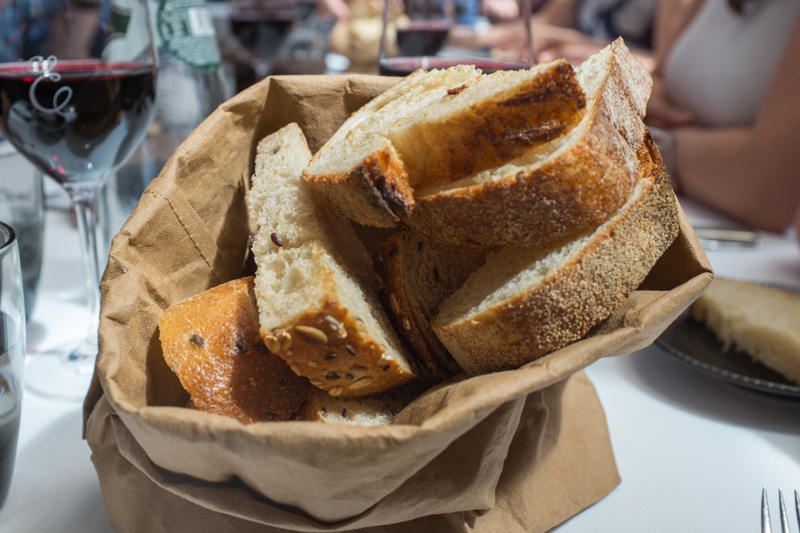 The pork hock terrine was exceptional. It was very dense and flavoursome and balanced nicely with the pickled vegetables and peach puree. The best way to eat this was to get a little bit of each component in each mouthful. A very complex dish in both flavour and texture. 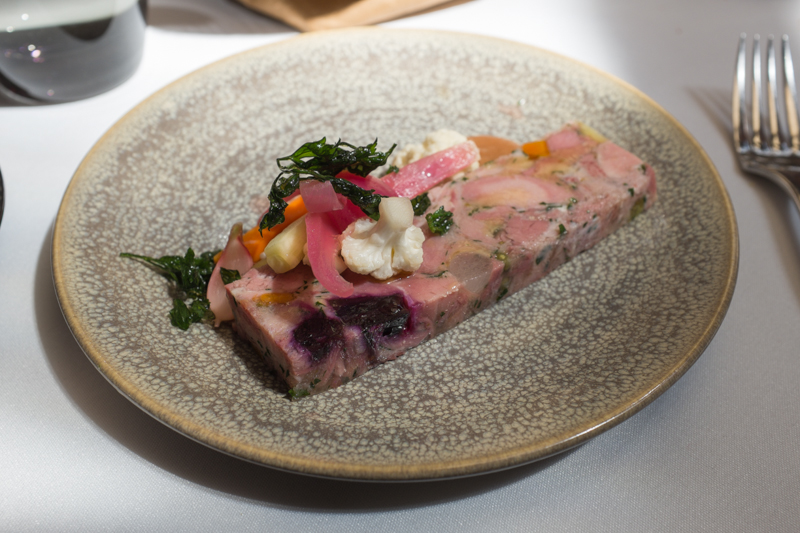 There was nothing fancy going on here. Just a wonderfully cooked piece of roast pork with fat so tender that it melted in the mouth. The crackle was extremely addictive, as crackle often is and the wholegrain mustard jus added a subtle kick to the already flavoursome roasted pork. The caramelised cauliflower puree was creamy without being heavy and added yet another dimension to the dish. The pork came with gravy and a side of perfectly roasted vegetables. Proper Sunday roast stuff. One of the diners in the group had a gluten intolerance and was served up a tasty quinoa salad with labne, herbs and spices. Sometimes the off-menu options provided to people with food intolerances are less than adequate but not in this case. 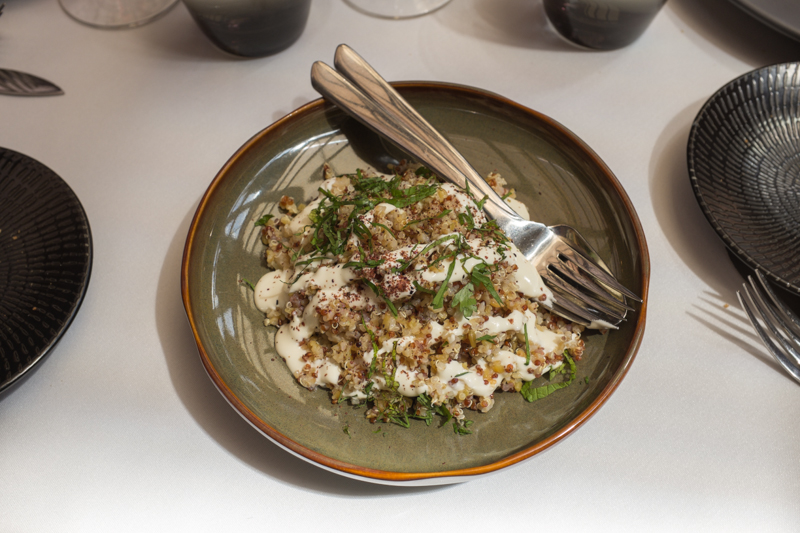 Dessert was vanilla panna cotta with poached pears, yoghurt sorbet & a crumb. Each component worked individually, as well as combined with the others. A dish that was both simple and complex at the same time. We might have missed out on the chance to dine at the old Estelle but we were mighty impressed with the meal we had at Estelle Bistro. The staff were excellent, balancing fun and engaging banter with professionalism and keen attention to detail. The food was outstanding with the Seasonal Sunday lunch representing excellent value. There were several things that we saw coming out onto the tables of others in the restaurant that we will be coming back for, and we also have another restaurant to add to the list of places to try, next door’s Estelle by Scott Pickett.