Future Music is a festival held in various capital cities across Australia at the end of summer each year.  It’s one of the big ones in the country and caters for a wide variety of tastes, with a definite skewing towards popular (as opposed to pop) music.  I went to Future Music Melbourne in 2013

Future Music Melbourne 2013 edition had a very English flavour to it, with artists such as The Prodigy, The Stone Roses, Dizzee Rascal, Bloc Party, Rudimental, Azealia Banks and Rita Ora performing.  It was almost like I was back in the UK (ignoring the fact that it was a scorching 36 degrees Celsius).  It wasn’t all British though, with Fun., Avicci, Steve Aoki, Fun and the Temper Trap also appearing amongst others.

There was a Mexican theme, which didn’t really mean anything on a practical level beyond there being some Mexican food on offer and some Mexican graphics around the place. I’m not usually a big fan of music festivals, and not even a huge fan of any of the other bands that were there, but I was keen to see the Temper Trap, Dizzee Rascal, The Prodigy and Bloc Party so there was enough going on to convince me to buy a ticket.  Plus the fact that I’d really not seen much live music since returning to Australia, as opposed to seeing a gig about once a month when I was living in London. Overall, I’m still not a huge fan of music festivals, and much prefer intimate, smaller gigs however on an objective level, the organisers did a good job with Future Music Melbourne 2013 in Melbourne.  The crowd was generally well behaved, there was decent food on offer (Grill’d for example, a quite good Australian burger chain, had a van set up), all the performances were on time, and security was certainly present everywhere, but not overbearing and quite friendly and helpful when you had a question.

You’ll have to excuse the quality on some of these photos.  A long zoom lens, in a crowd, with (come night time) challenging lighting certainly made getting quality snaps a difficult task.

The first act was saw was Fun..  I had no idea who they were, but the girls wanted to see them and there was nothing else on that I wanted to see at the time so off we went.  Not really my cup of tea, but the fluoro framed glasses wearing hipster crowd seemed to be enjoying themselves and, to be fair, on an objective level it was a good set – sound was well tuned, and the singer had a good voice and was engaging the crowd.  I recognised their two singles from the radio at the end which made me feel slightly less out of touch! Rudimental was playing on the other main stage and again, I had no idea who they were until they performed “Feel The Love”.  I quite enjoyed what I saw of these guys.  It was very high energy. While I was waiting in the (very long) line for burgers, the girls went off to see Psy.  His set lasted a whole 20 minutes, which included Gangnam Style twice.  Props to the guy, he’s making big money by stretching this thing out for as long as he can. The Temper Trap were one of the artists that I was keen to see and they didn’t disappoint.  It was a really good set. Dizzee Rascal was playing on the next stage, so I caught what I could of him in the gap between the Temper Trap and the Stone Roses.  I’ve been a Dizzee Rascal fan since the grimy days of his first album, and as his sounds has skewed more and more towards the pop end of spectrum I’ve been less impressed by his music.  There are still some  banging tunes, and there’s no doubt that the guy gives 100% when he is on stage, but the quality certainly isn’t what it was a few years back.  He was playing a mix of old and new which was good. Back to the main stage for the Stone Roses, and the average age of the crowd had suddenly increased by a good 10 years.  Given that the history of this band and the animosity that existed between them all for so long, this was a reunion that many wanted to see, but most probably never though would happen.

The energy in the crowd was amazing, and everyone was really getting into it.  A “best of” set, with absolutely no filler it was great.  Ian Brown’s voice had been known to be not so fantastic live at times, but tonight he was in good form.  This was also confirmation to me that Ian Brown is, in fact, the biggest Northerner of all-time, equalled only, perhaps, by Noel Gallagher.  Seeing Ian Brown walk and “dance” on stage in true late 1980s /early 1990s Manchester style was worth the price of admission alone. Bloc Party followed the Stone Roses and while their set was ok, the band wasn’t particularly engaging with the audience. We left early because we wanted to check out the Prodigy.  I probably would have stayed if they were only playing songs off their first two albums, but I’m not really much of a fan of their other output. 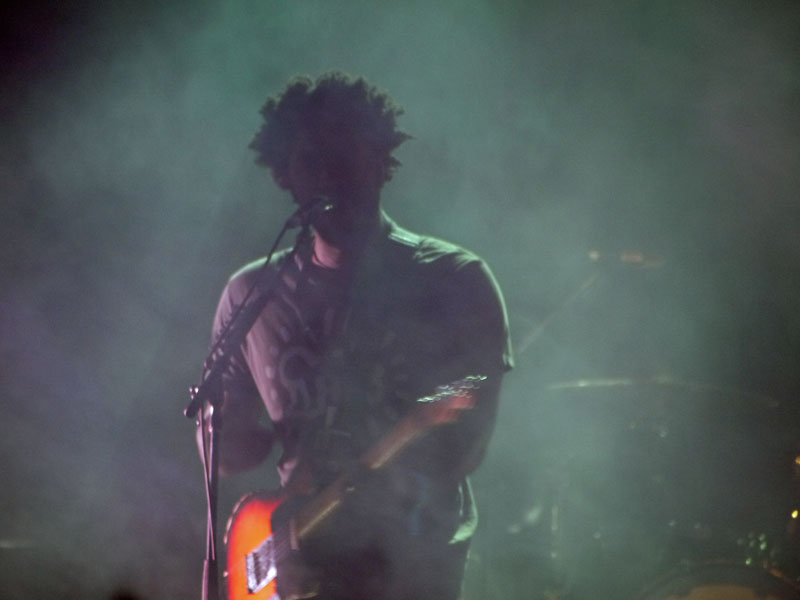 We stood outside the tent that the Prodigy were playing in.  It was loud, intense and sweaty and we weren’t really in the mood to cram ourselves in there.  There was a big screen set up outside the tent so we stood and watched a few songs.  It was a very fast and intense set and the energy just did not let up.  You can’t really see anything related to the band, but I really like the way this photo turned out. Overall, I had a good day out at Future Music Melbourne 2013.  My only real gripe had nothing to do with the festival, but trying to get home after.  To the Victorian State government, you have to get moving with the deregulation of taxi license plates.  There are simply not enough taxis on Melbourne’s streets at the best of times, and when an event like this is held, the problem is magnified immensely.

Have you seen any of these bands perform live before?  What were your thoughts?