LONDON | On a brisk winter’s day in London, we wanted to channel a bit of that Australian sunshine. We decided Bill Granger’s Granger & Co. in Clerkenwell might provide that cheerful boost we needed. Granger & Co has become of bit of brunch institution in London with three outposts of Bill’s eponymous restaurant in Notting Hill, King’s Cross, and Clerkenwell. We’ve heard tales of snaking queues at the W11 branch, despite mixed reviews. Fortunately, the Clerkenwell location does take reservations on the weekend which is perfect for those that like to plan ahead.

Granger divides opinion in both London and Australia. People either love him or hate him. On the one hand his food is simple and approachable, the kind of food you can find in his popular cookbooks and make at home. On the other hand… his food is simple and the kind of thing you can make at home. Whether this is a good or a bad thing we’ll leave you to decide, but all we know is that we were hungry and in the mood for some food with an Aussie twist. 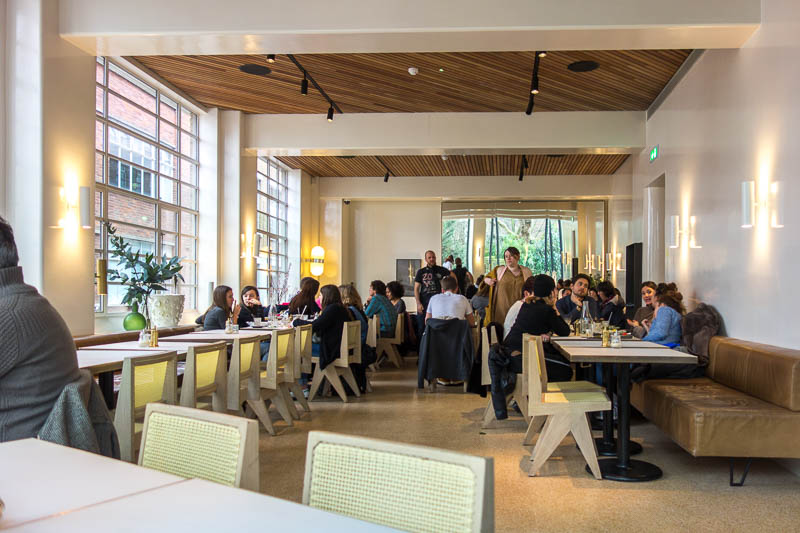 We arrived at 11am on a Sunday and were happy to see a few empty tables. We each started with perfectly roasted flat whites so authentic they transported us to back to the land down under. This is in no small part due to the quality beans used – they’re supplied by Allpress Espresso who have 2 roasteries in London, along with their original Australian and New Zealand operations. One of many examples of how deep the antipodean influences run through the menu at Granger & Co. On that point, the menu is chock full of fresh ingredients and interesting combinations – a reflection of the things you’d expect to find on an Australian cafe menu. There’s also a “Bill’s Classic” section, which includes some of the dishes that Granger is best known for. We spent extra time pondering the menu as many of the options sounded delicious. One of us had been suffering from a cold but the cold pressed “sunshine immunity” shot (£2.50) provided what felt like instant reprieve. We are not quite sure what’s in this miracle cure (the menu provides no clues), but detected hits of cayenne pepper, saffron, and beetroot. Whatever it was, it worked.

When it came to the food, we opted for one of Bill’s Classics – the sweet corn fritters, roast tomato, spinach and bacon (£13.50). It was tasty and hearty enough to keep us full until late in the day. We also had one of the Big Plates – broken eggs, ricotta, spinach, pine nuts, & grilled sourdough (£8.80). The combination of textures in this dish worked exceptionally well. Again, the portion of this dish was generous enough to keep us satisfied until dinner time. The sourdough bread was absolute perfection. Granger & Co channels the spirit that Bill Granger brought with his first Sydney restaurant that opened in Darlinghurst in 1993. Each Granger output is meant to channel what it means to be Australian, “sunny, easy-going, and generous”.

Is the food and Granger & Co. the most innovative you’ll find on a breakfast menu in London? No, but then again it’s not trying to be. As we stated earlier, it’s fresh, simple, approachable food and you know what to expect when you visit. For us, it was the perfect way to start a Sunday – good food, great service, in a well-appointed décor. For any Aussies out there feeling homesick, a visit to Granger and Co is the perfect cure.