Longhorn Saloon Carlton is the newest venture from brothers Will and Mick Balleau, owners of Collingwood’s Le Bon Ton and Richomond’s Chingon. Spread across 2 levels of the space that used to house German restaurant Mutti’s, is actually 2 venues – 5 Points Deli downstairs and Longhorn Saloon upstairs. When the venues first opened an effort was made to keep the menus quite distinct however this resulted in confusion, as what you could order depended on where you were sitting in the venue.

Today, there’s one menu for the whole venue which for the sake of simplicity, I’ll refer to as Longhorn Saloon only. The only real difference now is that the upstairs doesn’t open until the evening. The fit out is reminiscent of Le Bon Ton with good use being made of affordable materials in way that comes together as a cohesive whole. Exposed brick and wood, pressed tin which looks like copper and lights with exposed filaments. It’s both on trend and has the requisite American influences without feeling like it’s trying too hard. Quite simply, the place has character. The drinks list contains a very decent selection of whiskey and bourbon, along with the usual range of spirits, beer and wine. The wine list was what surprised us the most. It’s very focused and contains only a small number wines, each good quality selections of the style they represent. This approach means you spend less time messing about trying to decide what to have – as you’ve chosen a style of wine that you like, you’re going to get a good one. Moving back to the menu, it’s a sort of steakhouse meets New York style deli meets American comfort food greatest hits. The influences of the Balleau’s 2 venues is immediately apparent when looking at the menu, with a Southern flavour winding its way throughout the menu. In fact, the Le Bon Ton cheeseburger is on the menu and is called just that. The fried chicken tenders from Le Bon Ton also make an appearance on the menu, and of course, there are the steaks.

The fried soft shell crab po’ boy contains Lettuce, Tomato, Onion, Fresh Dill & Cucumber Tartar Sauce. A good amount of crab is in the sandwich and the ingredients are proportioned well so that nothing overpowers anything else. Held together by a soft roll, it’s comfort food done right. The rather sizeable Rueben is one of the highlights of the lunchtime menu and is a classic Reuben – Dark Rye, 5 Points Corned Brisket, Sauerkraut, Swiss Cheese, Russian Dressing. There’s no doubting the quality of the ingredients here – the corned brisket is brilliant and I enjoyed the sandwich but I think the proportions could be played around with a bit. Perhaps a bit more dressing or a more pickled sauerkraut. Get that right and this has the potential to be Melbourne’s best Rueben but at the moment I’d say the Rueben from Bowery To Williamsburg has the edge. These spicy hot jerk chicken wingettes were served with a side of Green Goddess Dressing, the 1970s favourite that seems to be experiencing a comeback of sorts in 2015. The “spicy” in the description is no joke and these things pack quite a bit of heat so the emulsifying properties of the avocado in the dressing are appreciated once your mouth starts to burn. They’re not “oh the pain, I’m dying!” hot but yeah, you get the idea. This dish was the surprise package of the night. We ordered it without really knowing what to expect and it turned out to be a very good choice. The creamed corn had just the right texture to it – very creamy and full of substance and the bacon grits were nice and smoky, adding a nice taste and textural variety to each mouthful. It’s really hard to find proper poutine in Melbourne. In fact, I’ve yet to find poutine that uses ? curd as the best in Canada do. In Melbourne cheese itself is used which isn’t necessarily a bad thing because let’s be honest, cheese is great. The best poutine I’ve had in Melbourne is from Fitzroy’s Kodiak Club and I have to say that the Longhorn Saloon version matches, and perhaps even eclipses that version. 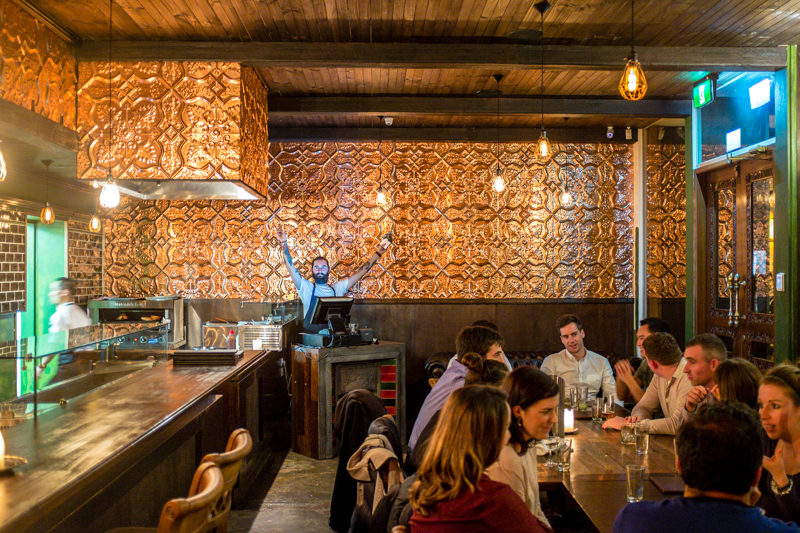 It’s impossible to visit Longhorn Saloon and not make comparison to Le Bon Ton. This is not a bad thing as the elements that have come across from ?’s sister venue are the ones that work. Food wise, my comment from the Le Bon Ton review also holds true for Longhorn Saloon. Apart from the Pastrami there wasn’t anything on the menu that I’d say was the best version of that item that I’ve had in Melbourne but all of us at the table thoroughly enjoyed everything that we ate. It’s a space with character, tasty food and drinks, and staff who are are friendly and manage to walk the line between professionalism and fun with ease.