Today, I headed into the CBD to see what changes had occurred since I left Perth almost 2 years ago. I’m quite an avid follower of developments in Perth so knew about the majority of changes, but it’s completely different when you see them for yourself, and gauge how they are changing the fabric of the city that you knew. Some changes were underwhelming, but overall I was impressed with what has happened in the time that I have been away. When I left, there was a big sense that Perth had a lot of potential that it was starting to capitalise on and it was nice to see that things are getting better, and that Perth is slowly maturing from a ”big country town” to a proper city. There is still a long way to go, but it is good to see that progress is being made.

Forest Place is one of the central public squares in Perth. It has aged very badly and the architecture to the right of the photo where I am standing is very late 1980s bad, lattice style concrete and all. All sorts of nefarious types used to hang around here after dark and it really wasn’t that good. With the redevelopment of the General Post Office (the beautiful old building to the left), and the completion of 140 William Street (retail tenants still moving in and a new classy bar to open, as well as office tenants to move in), which is above the Perth Underground train station, there will be a much greater flow of people through this square. On top of this, the square itself is being revamped and modernised, and the pedestrian link to the Perth train station across the road is also being improved. This area will be vastly different both visually and in use in a year or two.

Awaiting the opening of the aforementioned link from Perth Underground station to Forest Place.

Equus apartment complex under construction in the background. This is going to be a rather big building and should bring some much needed vibrancy to that part of the CBD which is very dead at the moment. More apartments and retail revamps are planned for that part of town.

Grand Lane is one of the laneways that has been selected by the Perth City Council for ”activation”. You can see it’s already started. Soon there will be some retail and bar/s down here.

Time to take a break to indulge in my Bubble Tea obsession yet again.

Hay Street, east of the Mall.

I used to have lunch at this Japanese restaurant all of the time when I worked in the Perth CBD. Went there on Saturday for dinner – it’s still great.

A slight detour from Hay Street, to this laneway connection Pier to Murray Street. A future candidate for activation perhaps?

Back onto Murray Street, continuing east.

This church was recently redeveloped. I don’t know if I’m sold on how they tried to blend the old with the new.

Heading up Hill Street towards the Perth Mint, which is the oldest operating mint in Australia.

Apartments going up in East Perth. From the photos just before the church, we’ve actually been in East Perth. A lot of apartments have gone up in East Perth over the past few years, and continue to do so. Hopefully the increase in population brings some much needed vibrancy to this part of town outside of office hours.

Walking along Riverside Drive, the grass is Langley Park, which was created by reclaiming land between 1921 and 1935. It was used as an airfield in the 1920s, and when the Red Bull air race is in Perth, it is again used as an air field for the race.

South Perth across the Swan River. 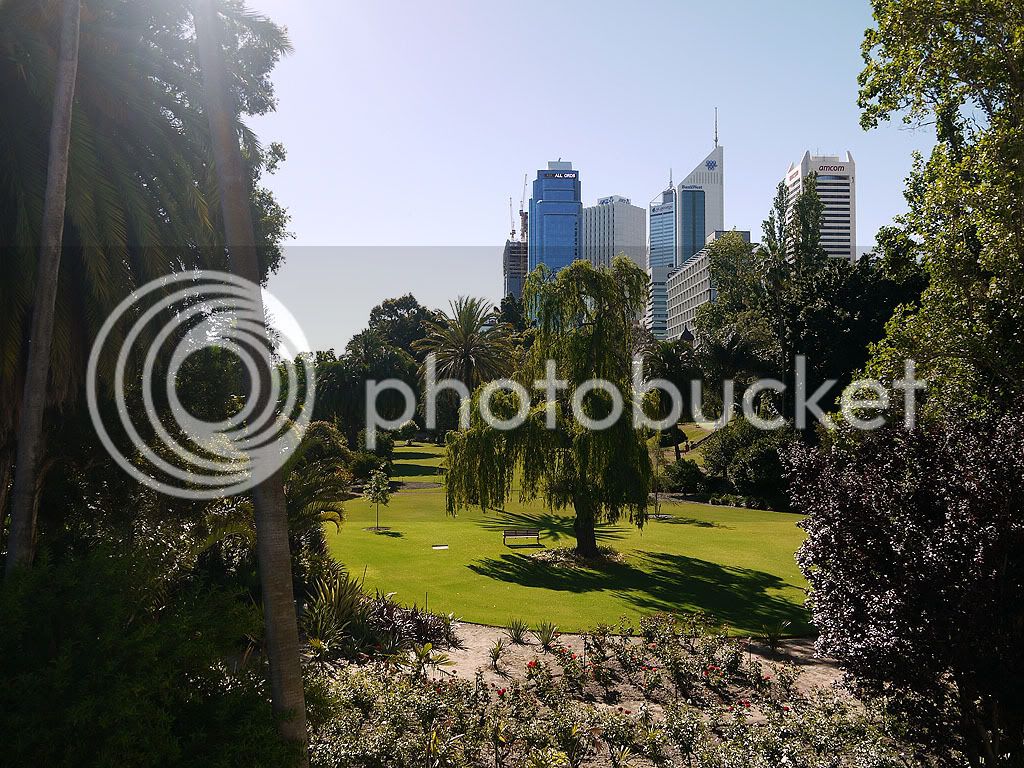 The oddly fascinating architecture of the Duxton Hotel.

St George’s Terrace is the street where, historically and still predominantly, all of Perth’s big office towers were located. This resulted in Perth having what many called a ”2D skyline”. With 140 William Street and Raine Square, this trend has been broken, and Perth’s skyline is finally developing some real depth.

Council House. This 1960s building was once voted as one of Perth’s biggest eyesores. Today, it is recognised as an excellent example of architecture from that era. Personally I think it’s a great building. Since I’ve been away, they have fit it out with LED lights that change colour at night.

The new ”St George and the Dragon” at St George’s cathedral. The brown building to the right in the background will be demolished relatively soon and the Old Treasury building to the left will, as part of a redevelopment of this block, become part of a luxury retail/hotel/apartment redevelopment. The tower that will go up on this site promises to be a ”landmark tower” and is expected to be both tall, and architecturally striking. The hotel operator is a known overseas luxury hotel brand.

Looking down Barrack Street, belltower in the distance. I didn’t get a chance to do a proper photo walk of the western part of the foreshore and St George’s terrace and will cover this at a later date. The belltower houses the Swan Bells, twelve of which were originally at St Martin-in-the-fields church at Trafalgar Square in London.

London Court, which in no way resembles or reminds me of London. The businessman who bought and redeveloped the land in 1937, Claude de Bernales, clearly had a fascination with Tudor/Elizabethan architecture.

Enex 100 is the retail component of this building, which was under construction when I left. For me, this is probably the biggest disappointment of all the recent developments. The design inside is disjointed and bland, and looks like it belongs in the scrapheap of generic 1990s failed retail concepts. 140 William Street has set a standard that others will have to match/beat going forward.

Trinity arcade is probably the nicest of all of Perth’s older arcades.

Howard Lane was the first lane to get the revamp treatment by the City of Perth. It had just started as I was getting ready to leave.

The building on the right was the Palace Hotel, and was a very popular and vibrant bar/pub up until the 1980s, when it became a bank branch. When the current tenant of the building, BankWest moves to their new HQ, this is expected to be turned back into a bar/pub. To the left of where I am standing, outside of this photo, is another restaurant/bar which will be opening next month. Along with the road works and footpath widenings that the City of Perth council is undertaking, St George’s terrace should become quite a vibrant street outside of office hours over the coming years. There are lots more bars, restaurants and retail developments occurring all along ”the Terrace”.

King Street is Perth’s high end fashion street, with lots of international brands moving in over the past few years. Prada is the latest and will be opening soon.

Just off King Street and connecting to Murray Street is Wolf lane. It has also been activated and a few more bars should be opening up next year.

Stupidly overpriced, yet I couldn’t help but come here for Kriek and fries back in the day.

Raine Square. This will also have connections to the Perth Underground station and retail and dining options.

Gothenburg: A Weekend Of Coffee & Cycling