MELBOURNE | Royal Mail Hotel Dunkeld is situated approximately 3 hours from Melbourne on the edge of the southern Grampians. With the breathtaking country side as its backdrop the Royal Mail Hotel has capitalised on its peaceful surrounding providing luxury accommodation, a venue for weddings, conferences facilities and a multiple award winning restaurant and cellar. The City Lane was invited to visit The Royal Mail Hotel and discover a little more about the property. As most are aware this venue has an outstanding reputation for the quality of food served at the restaurant. This  can be attributed to The Royal Mail Hotel’s ethos of sustainability and the use of seasonal produce. Currently, 80% of the food served at the restaurant is grown/reared on the property as such the menu changes regularly based on what is ready to pick in the garden. This change of menu may even occur mid service depending upon what is available on that day. This way they can ensure the best and freshest produce is served. This idea of sustainability is not limited to the food, and is extended to local fauna.

To further ensure the local fauna is not disturbed by any actions of The Royal Mail Hotel a conservation program has been initiated to help increase populations of local endangered species such as our furry friend below. Tours of the kitchens garden and conservation program are available for all guests. While we were on tour we met the imaginatively named possum “Poss”. He was shy at first but soon came out to say hi and see what the fuss was all about. Following our tour of the conservation facilities, we freshened up and headed to the restaurant for the main event – a 5 course tasting menu matched with wines from The Royal Mail Hotel’s internationally acclaimed and awarded $2 million wine cellar.

To start the evening an array of snacks were served. These included beetroot roll ups with a duck liver parfait and smoked eggplant ice-cream sandwich. All the snacks were delicious however the highlight was the roll up which evoked childhood memories of the school playground. Another highlight was the duck liver parfait which was rich and creamy with an intense meat flavour. Following the snacks we were served a beautiful confit egg yolk on toast. The egg yolk was creamy and somewhat gelatinous in texture which complimented the crunch from the toast and the nutty flavour of the toasted rice. Truly a great combination of textures and flavours – a real example of simplicity allowing the best qualities of top ingredients to shine through. 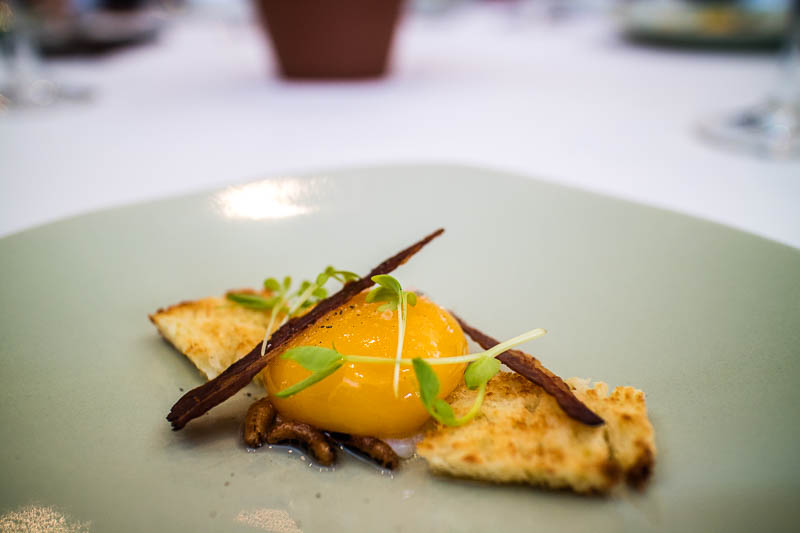 This dish was light and really highlighted the flavour of the vegetables which were picked earlier in the day from garden. In a common theme throughout the degustation, there was real textural complexity and contrast going on here. A selection of breads were served throughout the meal with freshly made butter. Out of the selection of breads on offer the donut was a stand out. This opinion was unanimous on our table as the base had a light crunch while the inside of the donut was incredibly light and fluffy. It was hard not to fill up on this utterly delicious donut. The other bread options were okay but nothing special – certainly not amongst the best we’ve had when fine dining. The next dish was one of the evening’s highlights. The perfectly pan fried piece of Flathead was accompanied by a sweet slightly chewy piece of piece of octopus which provided a great textural contrast to the dish while the tart pickled rhubarb rounded out the flavour combination brilliantly. Duck Under The Mulberry Bush

Duck under the mulberry bush was an very interesting dish. Tender duck breast was dressed with fresh raspberries and mulberry leaves from the garden. To ensure the flavour of duck really resonated throughout the dish duck liver twigs were added to intensify the flavour and add a slight crunch. The final savory dish of the evening was delicious, tender Royal Mail lamb cooked 3 ways with fresh zucchini flowers, blossom gel and dehydrated goats cheese. Everything here served to highlight the quality of the lamb, which was outstanding. Finally, dessert consisted of a deconstructed black forest cake. The classic combination of chocolate mousse with chunks of cherry was a very satisfying way to finish off a great meal. 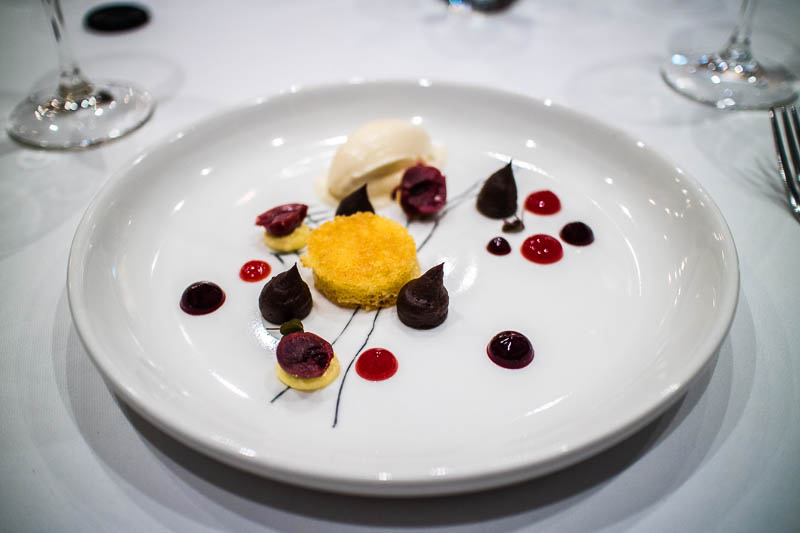 This was an interesting twist to end the night. All along there was this potted plant with sprouts on the table. Little did we know that the dirt was in fact “chocolate soil” and hidden inside was an assortment of petit fours! The Royal Mail Hotel Dunkeld definitely lives up to its reputation of great food in a picturesque setting. Its ethos is admirable and there’s a passion that’s evident in everything that’s done from pasture to plate. The quality of the produce is excellent and the highlights were the dishes which served to bring out the innate properties of each ingredient. There was nothing bad here, but the dishes that didn’t impress as much as others were the ones where too much was going on. The only real criticism was, apart from the donut, the lacklustre bread. We’re used to fine dining where it’s hard to resist filling up on the amazing bread and when compared to the high level of everything else here, it was hard not to notice that it didn’t really hit the mark. If you’re looking for a weekend away from Melbourne (or Adelaide for that matter) or are driving along the Great Ocean Road, the Royal Mail Hotel should definitely be on your dining list.