Dorje looked at what was happening in this part of town and noticed that many of the businesses that were failing serving curries were doing so because they weren’t doing any thing different. Being based in this part of town we can confirm that the locals here want authentic food and flavours. Many places attempt to do a faux authentic fitout based on what they think people will want, and thrown authenticity out the window when it comes to the actual food. Shimbu does the opposite, and offers an unashamedly modern space to diners. This isn’t the place to visit if you want to be overwhelmed by tacky décor and nick-nacks. Continuing from the modern fitout is the food itself. The menu is split into 2 parts – traditional and modern. On the traditional side of the menu you find the curries and momos that Tibetan cuisine is known for (and that the head chef has had over 25 years of experience cooking) while on the modern side is food that’s not even Tibetan – fried chicken, bao, tacos. Dorje and his family not only wants to serve traditional Tibetan food, but also offer a range of food that he just really likes and thinks customers will like too. This honesty about what he’s trying to do with Shimbu is refreshing. Basically “Some stuff is authentic, some is not, it is, however, all good.” A small range of beer, wine and cocktails are also on offer. When we were invited to try some of the food a Shimbu we took up the chance to see if this ethos was true. We didn’t pay on this occasion but have included prices for your reference. Momos are a dumpling commonly found in Tibet and Nepal. Sha momos contain beef and have a thick bready skin. At Shimbu you can get sha (beef) or tsel momos and choose to either have them steamed or fried. The steamed momos were very tasty however we found that they were a bit too “bready”. This is a personal preference thing as we’ve tried thick skinned dumplings that have been steamed before and have thought the same thing. With something like bao it works but with these kind of dumplings it makes them heavier than we like. The fried version work much better. Despite being fried the combination of crispy exterior means that they are less bready and actually lighter than the steamed version. Both tasty, but the fried momos win out on texture. 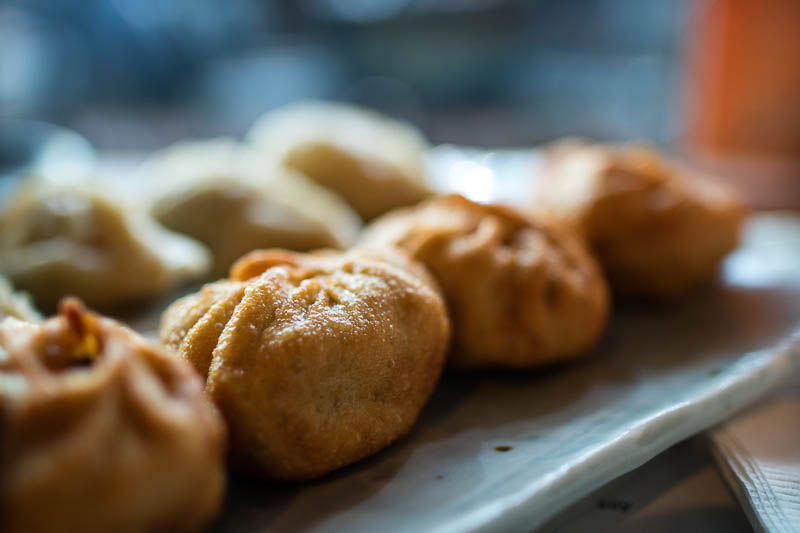 The spicy dipping sauce that the momos were served with was very tasty and helped to elevate each bite.

From the non-traditional portion of the menu, the fried chicken is simple and one of the best examples of fried chicken in town. The chicken breast is beautifully moist and tender while the coating is light and crispy. A little bit of mayo and sweet chilli sauce to dip each piece in adds the perfect finishing touch. Nothing fancy or exotic here, just some really good fried chicken. The first thing that struck us about the Bedhai was the size. This is one of the most generous servings of curry and rice we’ve received at a restaurant in Melbourne, and a bargain given the price. The flavours were unique and tasty – a mild curry with very fragrant notes and a generous amount of tender chicken.

We’ve not eaten a lot of Tibetan food so can’t exactly speak to its authenticity but we’d have to assume that the Solo was authentic as it was properly spicy. Each bite had a strong spice kick to it that continued to build over time. Toned down for the general populace this is not. It’s right on the borderline between being very spicy and too spicy but never crosses over into the too spicy region – the flavours beneath the spice are all apparent with each bite. Be warned though if you are adverse to heat. Shimbu has attempted to do a mixture of traditional Tibetan food and non-traditional food in a casual, modern environment and to our mind has succeeded. The food is fantastic, the servings generous, the pricing keen and the staff genuinely engaged and cheerful. There was a short wait for a table when we visited, and this was only after 2 weeks of being open with next to no publicity. A good sign when you’re attracting the locals this early on in the piece. We will definitely be back as paying customers in the future, especially as it’s on the way home and takeaway is offered!