MELBOURNE | Stokehouse City has decided to relaunch its offering and to bring about the change the owners have brought down Brisbane Times Good Food Guide’s Young Chef of the Year, Ollie Hansford from Brisbane’s Stokehouse Q. The new menu is focused on quality produce, with a particular emphasis on native Australian ingredients such as quandong, emu and wattleseed. The City Lane was invited to see what the new menu was all about and we were keen to experience Hansford’s take on things. The grand Victorian building in Alfred Place, best known in its incarnation as Miettas from 1984-96, has been restored to it rightful place as a grand dining area after being woefully underused for many years. The space might be grand and ornate, with white tablecloths on the table but the service is absolutely on point, casual and friendly but always completely professional. You’ll spot a lot of rope around the chandeliers – a nod to the original Stokehouse’s St Kilda home. When it comes to cocktails, Stokehouse City offers a small but impressive list of cocktails, with the classics available off-menu of course. The wine list is also focused, with just a few example of each style both locally and internationally. We like it when the list is small like this – rather than being overwhelmed, there’s simply a solid range of examples that go well with the food being served. We paired our kangaroo with a Syrahmi ‘Siren’ Shiraz – 2010 from Heathcote, VIC and it was superb. Fans of cognac and Armagnac are in luck. There’s some really nice stuff available if you’re that way inclined. We did not pay on this occasion, but have included prices for your reference.

Nicely springy bread with house churned butter. Simple and complimentary – just the way it should be. The crunchy haggis was one of the highlights of our meal, however this term isn’t quite appropriate in this write up as almost everything that we ate was a highlight. The haggis was perfectly spiced with a texture that managed to be both moist and crumbly. The crunch coating added yet another textural element while the sweet swede helped balance the rich flavours of the haggis. This green toasted rice tea had an unexpected salty kick to it and was a great way to cleanse the palate before continuing with our meal. 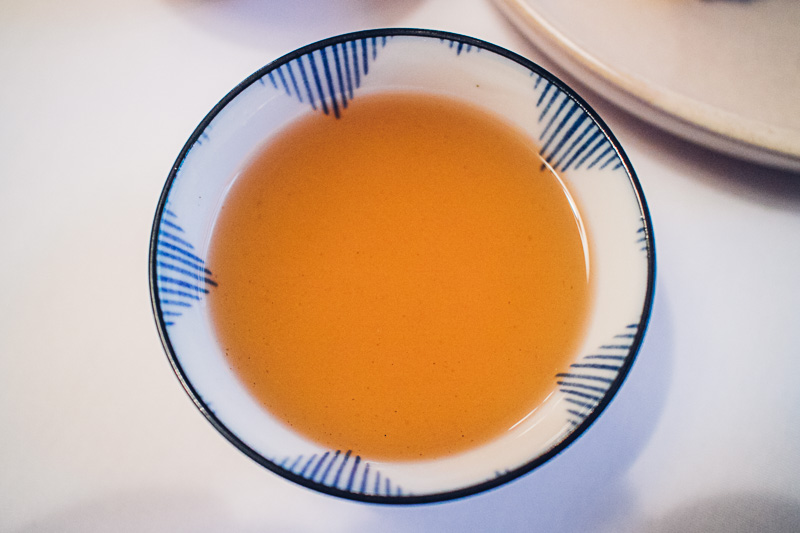 The savoury cone is not always the same thing. The cone itself is an almond meal based waffle cone and on this occasion it was filled with a rocket puree and topped with puffed rice. It was a really interesting flavour hit, with the concentrated rocket really giving it a, for lack of a better term, plant flavour. There’s a first time for everything and, despite having eaten many a prawn in our lives, neither Lauren nor I had ever eaten raw prawn before. As you’d expect, the rawness really contributed to this dish tasting “of the sea” which is no bad thing at all. It tasted very fresh, in the same way good sashimi does, with the Teff (a type of grass that’s native to Ethiopia and Eritrea) providing an earthy grain flavour. An unexpected delight. 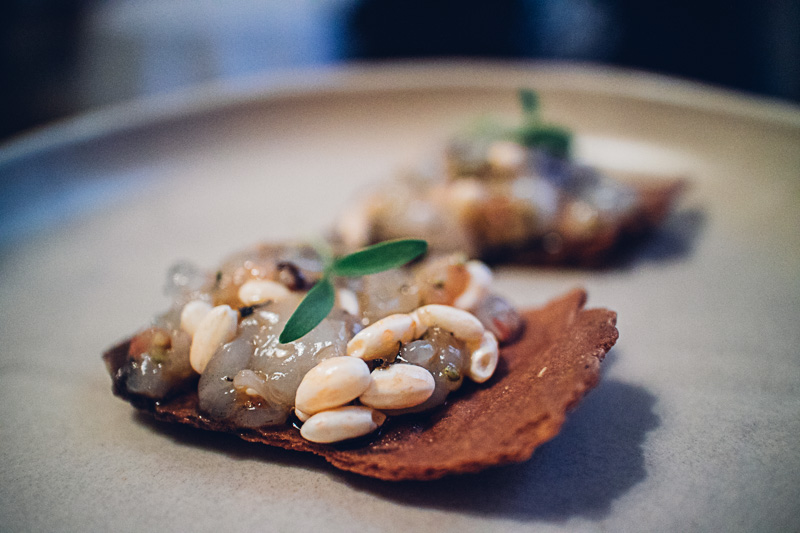 This was another real highlight of the meal. We loved the way that native ingredients were used and also the inventiveness of the squid “bacon”, which actually came from the wings which are usually discarded. This dish was creamy, salty and fatty and just like the prawns, tasted fresh and of the sea. If we had to pick one dish as being the standout of our meal at Stokehouse City, it’s the Ox Tongue. This is a piece of meat that is becoming increasingly prevalent on menus across Melbourne and that’s a very good thing. It has such an intense flavour and beautiful soft fatty texture to it. It’s a super versatile ingredient that can be used in a range of ways. In this case all of the “toppings” really gave each bite a lot of contrasts. The green strawberries added sweetness and crunch, the long pepper a bit of spice, the river mint a refreshing touch and the daikon a bit of tang. A beautifully complex dish with amazing flavours. This dish wasn’t bad by any means but was the one dish that didn’t hit the heights of the others. This is most likely due to us though, as due to Lauren’s nut allergy the wattleseed mix which contained nuts was omitted. When we ate the dish, we realised that this missing element was exactly what the dish needed to feel complete. Vodka soaked blueberries, blood pudding and kangaroo cooked rare. How could anyone resist? This dish was very rich, with the gamey kangaroo and the blood pudding really complimenting each other. It’s a rustic dish and reminded us of some of the venison dishes that we enjoyed when we lived in Europe. The blueberries added just the right touch of sweetness to each bite and the onion shells gave some nice texture to the dish. This is perhaps the best dessert we’ve eaten all year. The buttermilk ice-cream was delectably smooth and creamy and in complete contrast the the crunchy meringue-like vanilla shards. The rhubarb itself was a mixture of poached and freeze dried flavours which the Elderflower was a nice subtle addition (and a flavour we don’t see anywhere near enough of in Australia). Sweet, but not overly so, the flavour and texture’s of this dish complimented each other brilliantly. I hoped it would never end. I dubbed this dessert “The Deathstar” for obvious reasons but thankfully unlike the actual Deathstar, this dessert brought joy not suffering. The chocolate was rich and bitter, with a lot of the sweetness coming from the milk and coconut pearls inside. The chocolate “soil” underneath added a different texture to each mouthful while the milk skins, while looking pretty, didn’t add that much. All in all an excellent dessert that would leave any chocoholic satisfied. We went into our meal at Stokehouse City quite excited but didn’t anticipate just how good it would be. The space and service were excellent and the food really was something quite special. At its heart the food is quite simple, and we love the way Hansford combines native ingredients with all sorts of flavours and influences to create his dishes. Stokehouse City is larger and more fine dining-like in its appearance than many of its contemporaries but its still very much in tune with where dining is today, being casual in spirit while completely professional. Brisbane’s loss is Melbourne’s gain.