*Note: The Town Mouse has closed down*

The Town Mouse Carlton is a new restaurant by Christian McCabe, who from 2002-2010, ran one of Wellington’s best restaurants, Matterhorn.  New Zealand’s loss is Australia’s gain, as McCabe has hit on a real winner with the Town Mouse, helped by his sister Amber McCabe (who worked at Longrain), her husband Jay Comeskey (who worked at St Ali South) and former Matterhorn chef Dave Verheul. The Town Mouse occupies the site that was previously home to Nicholas Poelart’s Embrasse and Andrew McConnell’s Three, Two, One, both top restaurants of their time.  It’s been extensively renovated, and now resembles a New York style bistro, dominated by the large bar in the centre. It wasn’t me that was drawing the eyes of these diners, but another photographer who had a full SLR and tripod set-up who was taking various photos of the exterior, dining area and kitchen.  I get the feeling that someone much more important than me will be doing an upcoming review/feature on the Town Mouse. 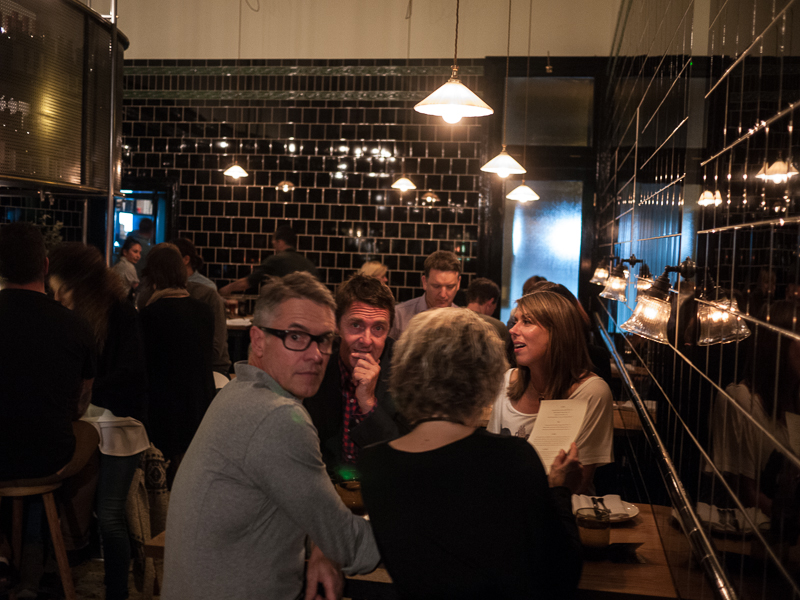 Coffee duties are taken care of by an ever reliable La Marzocco machine and Mazzer grinder. I really liked the way that the use of gold accentuated the dark furniture and black tiles of the venue.  Teapots, long, hanging lights and the like really add to the air of effortless suave that characterises the Town Mouse. The menu at the Town Mouse is European, with flourishes of other influences here and there, especially from Asia.  The ingredients are fresh and local, and the menu is separated into 6 sections, with almost everything working as either share dishes or individual dishes:

The staff are very happy to offer suggestions and rather than push any particular dish, they really make an effort to find out a little bit about what you’re after, or dishes that could compliment what you’ve already ordered if you’re undecided on exactly what you want.  It’s not hard to be undecided, as everything on the menu looks and sounds amazing.  In a change from many of the restaurants that I’ve eaten at this year, there are no names for the dishes.  They simply are what they are which is a very welcome thing – other restaurants take note, diners love it when you get to the point.

After much indecision and deliberation, my fiancée and I placed our order and prepared ourselves for the meal that was about to come our way.  To start with was complimentary bread with seaweed butter.  The seaweed was not over powering at all, and added a nice subtle boost to the butter. The oysters were beautiful.  Very fresh and, instead of vinegar, they were served with a chardonnay vinegar sorbet – which tastes exactly like you would imagine it to.  A very clever twist on what is such a simple dish. We were told by our waiter that this was one of the dishes that the Town Mouse was most proud of.  One bite, and it was easy to tell why.  It started off very sweet, with the honey overpowering the rest of the flavours. I thought to myself “this is nice, but not that special”.  A few seconds later, the sweetness of the honey began to dissipate and the other flavours kicked in, with the taste in my mouth making the switch from sweet to savoury.  By the time it was all gone, I was left thinking “wow. This dish was very tasty and all of the flavours combined perfectly.  I really liked the contrast between the texture of the crispy nori and the soft terrine. The clams were delicious, with the fennel being the stand out flavour that really enhanced the mussels. The bar was very well stocked, with a small selection of local craft beers and a decent selection of local and foreign wines and spirits.  I had a 3 Raven’s 55 American IPA to being with, then ordered a 2 brother’s Growler American Brown Ale (one of my favourites) to compliment the meat dishes that were on their way.  My fiancée ordered a beautiful glass of 2010 Benjamin Leroux Savigny-Lès-Beaune from Burgundy. Relatively speaking, the gnocchi was our least favourite dish of the night, and by relative I mean imagine watching the Miss Universe contest and saying that the 10th most beautiful woman in the world was the least attractive.

It was very tasty, it just didn’t reach the absolute heights of some of the other things that we ate. My fiancée has a severe nut allergy and when we eat out, we generally share our food, and get everything cooked without nuts.  With this dish, the pork jowl was cooked in peanut oil so this was not an option.  Usually, we’ll just order something else, but sometimes a dish sounds too good to pass up so poor me just has to eat the whole thing.  It’s a tough life.

A final kiss before turning my mouth into a weapon of mass (well ok, singular) destruction, and I dug into the pork.  It was full of flavour and ridiculously tender – the fat just melted in my mouth.  The “salad” had all kinds of conflicting flavours going on, but it all worked very well  It was very much a Thai/Korean fusion with the kimchi being toned down to match the intensity of the other flavours. We thought that we were ready for desserts, then we spotted the duck on a few tables and it looked divine.  It was a toss up actually between the duck breast and the crisp beef cheek – we ended up going for the duck because it was seasonal and therefore not guaranteed to be on the menu the next time we come (oh we will be dining at the Town Mouse again I can assure you).  the beef cheek on the other hand (Crisp beef cheek, whipped white soy cream, black garlic, parsnip & yuzu) is the Town Mouse’s signature dish and is available all year ’round.

Back to the duck, it was very tasty and tender and the caramelised yoghurt and sprouted wheat worked perfectly in unison to provide an amazing flavour and added texture to the dish. My fiancée, who doesn’t believe me when I tell her that humans have a separate stomach for dessert, had reached her full point after the addition of the duck to our order, so finished light with a small bowl of strawberries which she enjoyed. I, on the other hand, was split between 2 desserts.  Usually, it’s a chocolate option and a non-chocolate option that vie for my affections come dessert time, but this time it was two of the non-chocolate choices that had me undecided.  The dessert I didn’t go for was the braised quince (Warm rooibos braised quince, walnut, verbena, coffee & white ale ice cream).  It was a really tough choice, especially with the aroma of coffee filling my nose after some beans had been ground in front of me for someone else’s order.

I’m a big fan of yuzu (and spiced rum and coconut), so in a snap decision decided to go for the dessert that I did.  It was delicious.  I really liked the crispy meringue exterior to the sorbet, and the way all of the flavours came together.  The spiced rum jelly cubes were seriously boozy on their own, but mixed up with everything else in a mouthful, were wonderful. Overall, I was nothing but impressed by my night at the Town Mouse, and will make the claim here and now that this is the best dining experience I’ve had in Melbourne in 2013.

The food and flavours were amazing – up there with what I’ve eaten in Michelin starred restaurants abroad.  The service was excellent – attentive, knowledgeable and friendly staff who were always there when you needed them but never in the way or overbearing. The vibe was effortlessly cool and suave.  Top level stuff, all for a price that was very fair.

The Town Mouse is great addition to Melbourne’s dining scene, and one that I cannot wait to return to. Beef cheek and braised quince (as well as the potatoes which I’ve heard amazing things about), you’re next.

…oh and if none of that has convinced you, the business cards have a logo that glows in the dark.