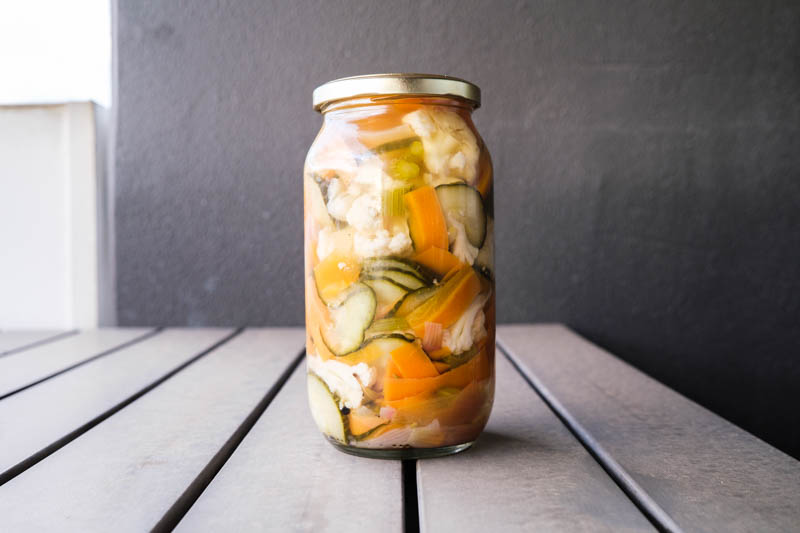 RECIPES | This torshi/giardiniera recipe is one that I never really put much thought into until recently. By that, I mean that it’s something that I grew up with, that my Macedonian grandparents always made and had in the fridge, and has always been a part of my life. We all have these foods that we eat all the time, but don’t actually know much about, or sometimes even know what they’re called.

Torshi, or what the Italians call giardiniera, is simply vegetables that have been pickled in vinegar with salt and spices. It’s so simple to make at home, and is delicious. No one’s exactly sure where the dish originated as it’s so old and common in Middle Eastern, Turkish, Mediterranean and Balkan cuisine. Perhaps Persia, given that the word torshi comes from the Turkish word turşu, which in turn comes from the Persian torsh, which means ‘sour’.

Exactly what vegetables and spices, and how much vinegar, and the type of vinegar you use, depends on the country and personal preference. This is the recipe that Lauren and I make at home, which is pretty much the way that it’s done in Macedonia/Northern Greece. It uses cucumber, carrot, cauliflower, and shallots, and an aromatic spice mix.

As I stated earlier this dish is quite flexible. To me, the most important thing is the use of white vinegar. It give me the taste that I’m familiar with, but of course you can experiment.