LONDON | Ever since the London Chicken Wing Challenge, The City Lane’s London team have been contemplating our next test. Our next mission, we decided, would be a simple one – to find who serves London’s best ribs.. Doing this on our own would have been tough so we enlisted the same panel from our Chicken Wing challenge, plus one bonus judge to help us.

We selected Shoreditch as the base for our challenge due to the concentration of smokehouses in the area. It just wasn’t going to be possible to get ribs from opposite sides of the city for the one challenge (although it does give us an excuse for running another one in a different part of London). The reason for this is because we wanted to try all of the ribs fresh at the same time. In no particular order the contenders were: We used Deliveroo and Take Eat Easy to help facilitate the challenge. We tried each rib and then cast our vote, rating each wing 1 out of 10, with 10 being the best. In a testament to the mantra that every vote counts, the winner captured first by a small lead. Without further ado, here are the results from last to first place.

The portion of ribs here was super generous. The sauce had the right amount of tang, but the ribs were a bit dry for our liking. Overall, Porky’s ribs were tasty, but not quite at the level of the other challengers. 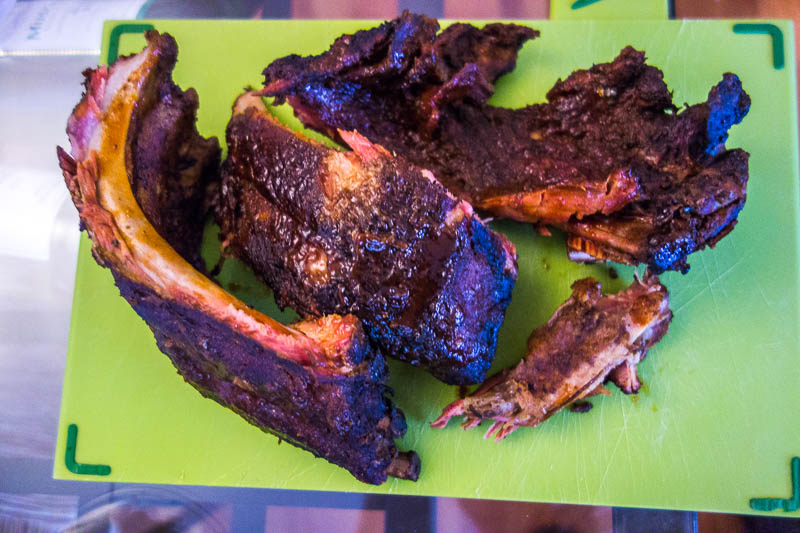 The ribs from Red’s certainly looked gorgeous with their thick, dark glazed sauce. Unfortunately the sauce didn’t get quite absorbed enough by the meat. Like Porky’s the ribs from Red’s were tasty but marked down as they were a bit too dry for our liking, requiring a lot of chewing to get through. The Bodean’s rack was smaller than other offerings, but the ribs packed a lot of meat. The sauce was on the sweet side with a touch of a bacon flavor. Overall, these were cooked well with the right amount of tenderness. The ribs from Caboose were nearly overlooked from our pool of contenders but we are sure glad they made the line-up. The ribs were tender, moist, spicy and flavoursome. These ribs literally stopped the conversation of our judging panel. They fell off the bone and were able to be cut with the paper knife that came with one of the deliveries. These were the kind of ribs that just left you wanting more. Caboose has custom built railway cabin out the back of Old Truman Brewery off Brick Lane symbolizing the slow journey of cooking. So what are you waiting for? Don’t be the last one to get on the Caboose. Which leaves us with…

Smokestak offers up boneless ribs which are melt- in-your mouth fantastic. We tried both the pork and beef ribs. The precision of Smokestak’s legendary 4.5 tonne smoker is evident in the flavouring of the ribs. They were the perfect combination of sweet, with the right touch of smokey meat flavor. Founder, David Carter, started Smokestak after months of travelling and studying the US BBQ scene. We know where we will be (and where you should be) this summer – enjoying Smokestak’s meat offerings at Shoreditch’s Dinerama. From the above, you can see that competition was tight and all the contenders performed above average. We finished the challenge absolutely stuffed, not least because we ordered sides from each venue. Even if the rib did not come top of the charts, some of the sides such as chili cheese and sweet potato fries (Bodean’s) and Mac and Cheese (Red’s True BBQ) would merit a return visit on their own. Did your favorite London rib venue make the cut?

We’ve already decided on our next challenge, London’s Best Pulled Pork. Do you have suggestions on which of London’s purveyors of pulled pork should make the cut for the challenge?