LONDON | Chick ‘n Sours Dalston is an East London fried chicken favourite with its “whimsical menu of herb fed fried chicken, next level sides, sour cocktails, local beers & cracking soft serve ice cream creations”. When we got word that they were partaking in a kitchen swap with another East London favourite of ours, Berber & Q, we raced to get tickets. On 16 November 2016, Carl Clarke and his crew from Chick ‘n Sours traveled to the archways in Haggerston to the Berber & Q kitchen to take part in a friendly neighbourhood kitchen throwdown. Due to the popularity of these restaurants, we set our expectations high for our first ever kitchen battle. As both venues are normally closed on Mondays, it was a special treat to dine here at the start of the week. For £39.50, we enjoyed a welcome cocktail, snack, and 3 course meal. We loved the concept of collaborative competition. The Chick ‘n Sours menu took inspiration from both Asian and Middle Eastern cuisines. The result was a fun and imaginative meal.

Our welcome cocktail contained Korean favourite Soju and grapefruit. The neutral flavour of Soju and tartness of the grapefruit made it a very welcoming start to the evening. The menu was divided into the beginning, the middle, and the end. We started with schmaltz, chicken cracking, smoked curds, and pickled pomegranate. Wow, what can we say? This dish opened up our mind as to what crackling could be; it was our first time having crackling of the non-pork variety. Schmaltz is a chicken fat commonly used in Jewish cuisine. This unique combination of the crunch or crackling, a strong smokey flavour, and fresh hit of pomegranate. Next was hot & sour smoked pineapple. We really enjoyed this dish; it was back-to-basics sweet and sour with the right punch of chili. The final part of the first act was coal roasted sweet potato Szechuan style. The sweet potato was served piping hot in a secret tempura batter that is normally used on aubergine at Chick ‘n sours. The dish was perfectly fluffy with the right amount of lingering spice courtesy of fresh chili. 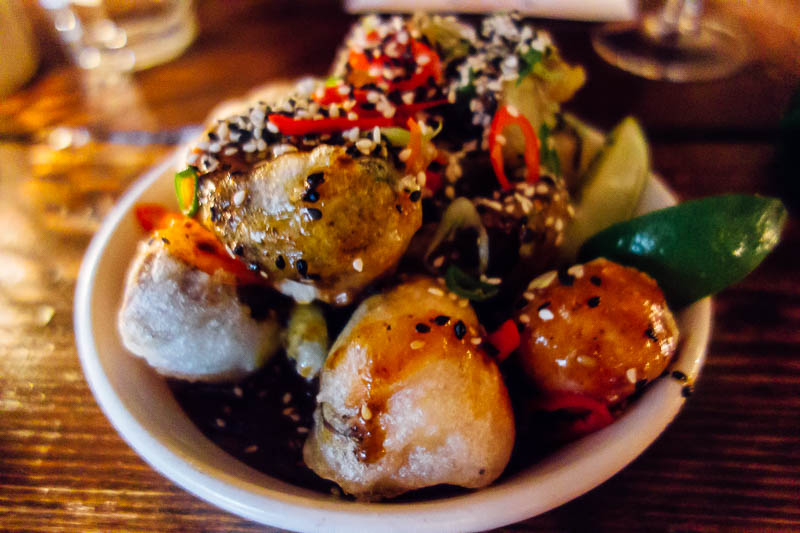 The main was an absolute stunner. It was smoked Hampshire belly rib, collard greens, kimchi & bacon. The rib contained a thin strip of crackling and a refreshing stuffing with a hint of ginger. The Korean inspired-fermented sauce was bursting with the sriracha with combined well with the collard greens and a bit of cubed apple served on the side. During the meal, we tried to put ourselves in the shoes of the chefs learning their way around a new kitchen. Our waitress told us they didn’t have a dress rehearsal so we were amazed at how seamless the takeover went. Despite serving the entire restaurant at the same time, the staff did not compromise on service. David Wolanksi, who leads up the front of house at Chick ‘n Sours stopped by to ensure we were happy and answer a few questions we had about the meal. If you’re interested in checking out what Chick ‘n Sours have to offer at their home location, here are the details you need.