China Chilli Melbourne is a Sichuan restaurant in the Rainbow Complex on Bourke Street, which is home to many Chinese restaurants. I discovered it while heading up the escalators to the CBD branch of Dainty Sichuan a few weeks prior and added it to my list of “places to try”. When I visited a few weeks later on a Friday night the place was packed full of people, with some very inciting smells coming from the inside. After a wait of about 15 minutes our group of 4 was seated inside and handed a menu, which was on an iPad. Although a lot of what is written at China Chilli is in Chinese, the menu items contained English descriptions and pictures which made ordering a breeze – that was until we finished ordering and clicked on the “My Menu” button which took us to a screen that contained no English. I walked up to the front counter and the staff member was happy enough to finalise the process for me. The menu contained a variety of Sichuan dishes and a few other choices too. There were some very interesting looking items on the menu that my wife and I wanted to try however we were with 2 friends who are somewhat more conservative when it comes to food than my wife and I so we stuck to items that looked like they’d appeal to everyone. This was my least favourite dish of the night. I wasn’t a fan of the texture which was very tough and chewy however the flavour was nice and pork like, which was to be expected. 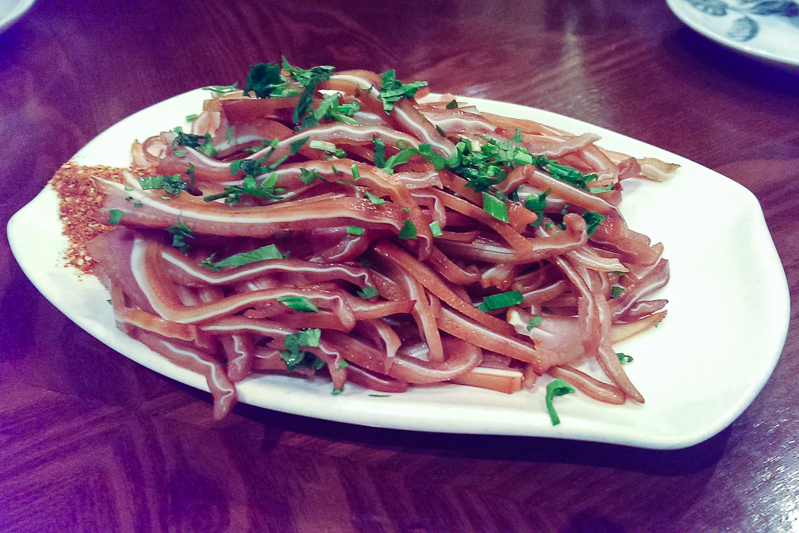 I have no idea if this is actually something that’s eating in Sichuan province however judged on its own it was a tasty offering. The prawns were plump and juicy, the batter was crisp and light and the sauce was not overly spicy. Not quite what I had expected and certainly the odd dish out of the night but it was enjoyable. I’d never eaten this before until I tried it at Dainty Sichuan. The pork was tender and very flavoursome. The dish had a kick to it, with the spice levels building in the mouth for a while after each mouthful. My friend who isn’t into particularly spicy food put this as “her limit” – in other words if you don’t like spicy food, you’d probably still be ok with this dish. The lamb ribs were very tasty and the meat was tender. The spice levels on this, despite being listed as “1 chilli level” – the same as the pork shreds, were much more intense than the pork shreds. As is the case with Sichuan food, the general consensus after the first bite was “this isn’t too bad” followed an intense built up of heat afterwards. It was very spicy, and it defeated 2 of my friends. My wife and I however kept digging in for more. These mochi were very nice. Glutinous and sweet as expected, the sesame was balanced against the rice nicely. Overall, the experience at China Chilli was decent. Service was struggling to keep up with the business of the restaurant at times but the food all came out in a timely manner and we all left full and satisfied. There wasn’t anything that really stood out, but there wasn’t anything that was terrible either.  I wouldn’t go out of my way to eat at China Chilli however if you’re in the CBD and feel like some Chinese food it’s certainly worth considering, along with Dainty Sichuan and China Red in the same complex.