PERTH | Long Chim Perth is superstar Thai chef David Thompson’s latest restaurant and has got people all over Australia talking. For foodies, David Thompson need no introduction but for those who aren’t aware, Sydney born Thompson is known for what is perhaps the best English language Thai cookbook in the world and for his fine dining Thai restaurant Nahm in Bangkok, where Thompson resides. He opened Long Chim Singapore in early 2015 and when he announced that he was looking to open a restaurant in Australia people were quite excited. The surprise to many came when it was announced that Thompson’s new restaurant wouldn’t be in Melbourne or Sydney, but rather Perth. The food and drink scene in Perth has improved by leaps and bounds over the past decade but something like this was unexpected. Housed in the recently renovated State Buildings, Long Chim feels right at home, amongst a precinct that contains a boutique hotel, and several excellent places in which to eat and drink. The building has been painstakingly restored with a strong eye to maintaining the beauty of the old heritage listed building creating some striking spaces for the venues inside. From the moment you walk down the stairs to Long Chim you can see that great effort has gone in fitting out the space. Heritage elements mix with modern design, classy sleek lines combine with warm Thai influences and street art by local artists. The courtyard is small yet open and the sense of openness mixed with “basement chic” is very much modern Perth. A basement space that would seem at home in any cool city around the world is all well and good, but it’d be a shame to waste that beautiful sun and clear blue skies that Perth is famous for – Long Chim gives diners the choice of both. The menu at Long Chim is compact – a single page split into starters, whole plates and share plates but truth be told the entire menu is designed for sharing and ideally you want to visit as a group of 3 or more to be able to order a nice selection of dishes. Another sheet provides an impressive selection of Thai inspired cocktails – new creations and twists on the classics designed by the team at Singapore’s 28 Hong Kong Street (considered one of the world’s best bars). For those not in the mood for a cocktail, a focused selection of beer and wine is offered, along with a very impressive spirit selection. In fact if you weren’t in the mood for a full meal, you could quite happily grab a seat at the bar and enjoy a few drinks and starters as snacks. The space is casual enough to work both as a restaurant and bar. The food at Long Chim is authentic Thai with a modern sensibility. There are the curries and Laksa that can be found on any Thai menu along with some innovative dishes that while authentic in their flavours and soul, are unashamedly modern. What Thompson is famous for is his ability to balance Thai flavours perfectly, and this is evident throughout all of the food at Long Chim. The modern dishes excite and surprise, while remaining totally based in traditional Thai flavours and techniques. When it comes to the simple traditional dishes, the balance of flavours reveal unexpected complexities not found in many Thai places outside of Thailand. 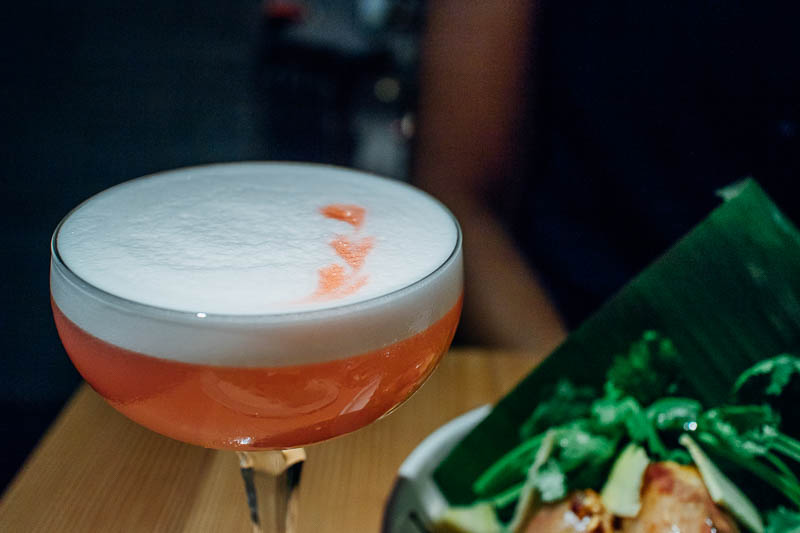 This combination of peach, mint, rosewater whites and pisco is very strong on the peach notes and very tasty. A fruitier twist on the classic pisco sour. This one is a twist on the classic Moscow Mule – ginger beer, kaffir lime, Thai bitters and vodka. It doesn’t hold back on the ginger has a nice kick to it. If there was one dish that didn’t particularly wow us this was it. Don’t get me wrong, the beef skewers with cumin, coriander and tumeric were very tasty – tender beef with melt in your mouth fat and a slightly crunchy seasoning, but compared to what was to come they weren’t particularly memorable. The North Eastern Thai pork sausage was one of the highlights of the meal. These were amongst the tastiest sausages we have ever tried. Beautifully succulent fermented pork mince combined with rice meant that each bite was velvety and luxurious and slightly sour. The flavours were mild and well balanced, aided by the addition of ginger and coriander which you’re free to tear at and add to each mouthful as you please. A must order dish. The betel leaves packed more of a punch than the first 2 starters due to the strong acidity. This is quite a fresh menu item with the leaves themselves and the generous use of citrus. This is a good example of Thompson’s ability to balance flavours while being bold at the same time. Alone, these would have been too acidic however the generous portion of coconut in each bit served to cut through some of the acidity. It’s a bite sized mouthful that pushes you to the edge and then pulls you back just as you’re about to fall over. The red duck curry was served with a very generous portion of rice which was nice to see given the tendency for many restaurants to skimp on rice when serving a curry. The curry itself was a fiery red and peppered with fresh chillies. This translated into a dish that was quite spicy which is exactly what we like to see in a red curry. The flavours and spices were very well balanced however so while it was a hot curry, the heat was never so unbearable as to mask the flavours underneath it. The duck was nicely cooked and super tender, though not quite at that “fall off the bone” level that we like. Along with the pork sausage this was another real highlight of the meal. The char of the dish could be smelled as the plate approached our table, and it’s another example of Thompson being bold with flavour while never allowing it to overpower the dish. The char is strong, and at first it appears that the dish is going to taste too burnt however each bite is perfectly balanced.

The freshness of the lettuce and the sweetness of the Sriracha mellow out the char while allowing it to remain the dominant note of each bite. The noodles are perfectly cooked with a nice springiness to them, combined with generous amounts of chicken, squid and celery. This is the dish that, despite being very full and ready to leave, we couldn’t help but keep nibbling on.

The food above was enough for 3 people but there only being 2 of us meant that by the time we approached the end of our meal there was no room left for dessert. There’s a lot that looks good on the dessert menu and we have it on good authority that the banana roti ($13.00) is the star of the dessert menu.

We’ve been living in Melbourne for 4 years now and Long Chim is the first place that we’ve heard foodies say they’re considering flying over to Perth for. Thompson’s food is rooted in authentic Thai flavours and techniques, and each dish whether it be traditional or modern shows respect to the ingredients and its influences. The balance of flavours is never anything other than superb. While not worth a flight over to Perth on its own, Long Chim is up there with the best Thai restaurants in Australia and yet another reason, in conjunction with the many other high quality food and drinking establishments that have opened up in recent years, to fly over to Perth for a long weekend. Definitely one of Perth’s must try dining venues.