Sun Moth Canteen & Bar Melbourne is a cafe and bar hidden down Niagara Lane in the CBD. It’s the brainchild of Luke Mutton and Kylie Mackinlay, formerly of Dead Man Espresso and Common Galaxia and friends Jackson Duxbury and Tod La Mar who learned their trade at Perth’s Epic Espresso and Tiger Tiger. The owners describe Sun Moth as “the kind of place we like to hang out at” and indeed when you walk in you immediately realise that this is not a place that’s trying to appeal anyone’s notion of what a Melbourne cafe/bar in 2015 “should” be. The space is white and light, with high ceilings and brickwork. The bar and kitchen takes up a large potion of the centre of the room with a range of spaces for people to chill out and chat, work on their laptops or watch the skating montage (and movies sometimes) on the big projection screen. It’s a really chilled out space and has a great vibe about it. The drinks menu is very foused. There are 6 craft beers on tap at any given time, and they rotate often. The range of beers is always very impressive (we’ve been here a few times in the evenings) and it’s not uncommon for us to find a beer on tap that we haven’t tried before. Craft beer affindicios take note.

Wines are also given a lot of attention at Sun Moth, with the small range consisting of some very unique wines from small Australian producers. Think natural and organic wines from young, start-up winemakers – it’s great to see a venue eschew the big names in favour of showcasing small and unknown brands. The ham hock terrine was very tasty. A classic terrine done right with the pickled egg adding a nice touch. The light salad was nothing fancy and didn’t really add much to the dish, although we’ve looked at the menu since and notice that the salad has been replaced with piccalilli, an English interpretation of Indian chopped pickled vegetables and spices in a relish. This sound like it would work much better with the terrine. This was one of the best things on the menu. A very generous filling of full flavoured jamon and taleggio was lifted by the addition of poached fig which gave the sandwich a touch of sweetness. A very simple thing to make and eat but the flavours and proportions were spot on. Really tasty. The white bean stew is something that those who are both vegetarian and gluten free can enjoy. It contains rosemary, leek & white bean stew with a choice of either
lamb & leek sausage & bread or braised mushrooms. We went for the non-vegetarian option and were very happy with our choice. The stew itself was creamy as tasty with the sausage adding a nice textural balance. The eggplant parmigana contained braised eggplant with red sauce, mozzarella, croutons, basil & pecorino. Putting a vegetarian parmigana on the menu without an accompanying chicken or veal option is always a risk but in this case the risk paid off. The thick slices of eggplant had good texture and the flavours were all you’d want from a parmigana. At $13.00 it’s really well priced too. 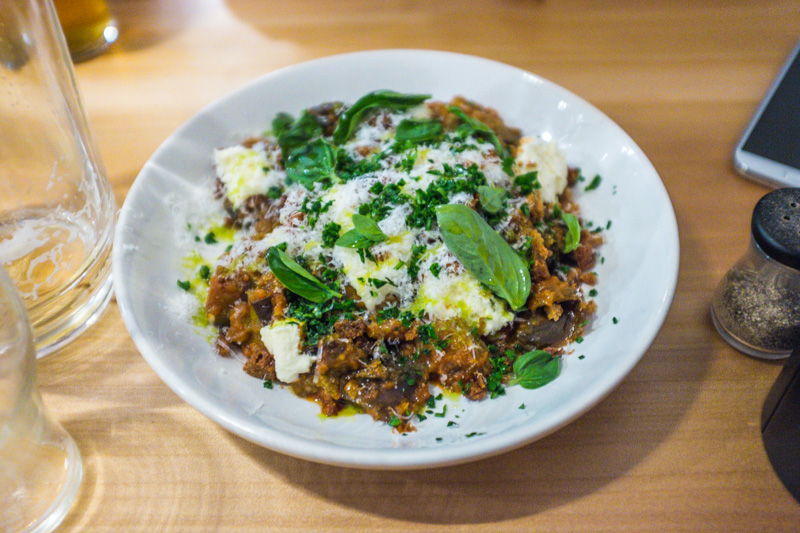 The best place to finish this write up is where I began. The desire to “create a space where [they] wanted to hang out” has well and truly been met. You can tell that the guys really enjoy working here. They look genuinely happy to be working and are clearly passionate about the wines and beers that they serve. The food was an unexpected surprise and, after seeing the day time menu, we know we’ll certainly be back to try some of the other food options.