MELBOURNE | Tokyo Tina Windsor is from the brains behind the popular Saigon Sally and Hanoi Hannah, and states its claim as being an offering of “…the best eats, beats and vibes inspired from the streets of Japan … a snapshot of the exotic country as it is today”. Having visited Japan twice in the past 18 months, and having very much enjoyed trying the wide array of food on offer in the country, I was intrigued as to whether or not Tokyo Tina could pull it off.

Walking inside the venue and the Japanese influences are evident. It doesn’t really feel like a place that you’d find in Japan, but rather a place that has been inspired by Japan, which is exactly what owners Simon Blacher, Paul Nguyen and Nic Coulter have aimed to do (they visited Japan for inspiration along with chef Adrian Li and floor manager Charlie Rothery before settling on the final concept). Nintendo characters and an assortment of anime characters are placed all over the venue and the walls are brightly painted with various homages to Japanese pop culture. This isn’t the clean simplicity of Japan, nor is it the utter craziness of the themed cafes you find in that part of the world – it’s something in the middle. The drinks menu contains a very decent selection of Japanese beers, whiskeys, sake and umeshu which is kept company by some local beers and wines and an impressive cocktail list. The words “a snapshot of the exotic country as it is today” don’t really apply to to the food at Tokyo Tina and a claim that Blacher made has made elsewhere “we’re trying to do things a little bit left-of-centre” is more apt. Japanese ingredients, flavours and techniques are joined by Korean ones, and the occasional Chinese influence also makes an appearance. The food that you find in Japan today this is not but, as with the decor, the Japanese inspiration is clear.

Ceviche/sashimi served in cones has become a bit of a thing in Melbourne and it’s something that most places either get very right or very wrong. Thankfully the Tokyo Tina version is very tasty, with the fresh kingfish blending nicely with the subtle flavours and apple and slight hint of wasabi. The charcoal cone adds texture, rather than flavour. 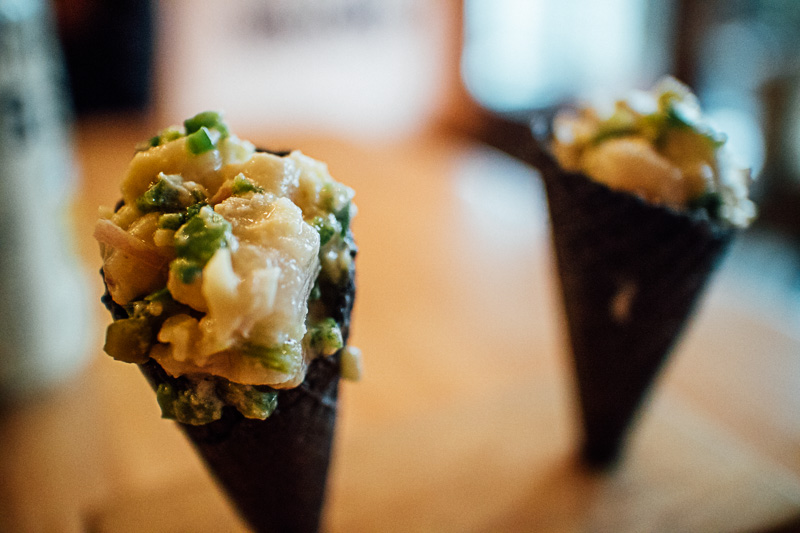 I’m a big fan of Tataki and had to order this when I saw it. The quality of the beef was apparent at first bite, with the lightly seared wagyu melting away beautifully with each bite. Where this dish went wrong was with the miso mustard. Beef this good should be left to shine and the rather sweet miso mustard completely overpowered each bite. Eaten without the mustard, this dish was fantastic. A smaller amount of a the more subtly flavoured hot mustard that is popular in Japan during the Spring (it is often used instead of wasabi during this time) would have been a much better option. There are 3 options for the DIY Bao, and the experience with the pork belly one was enough alone to convince me to come back to Tokyo Tina in the future. It was quite simply outstanding. One of those “can’t talk, contemplating how good life is” while eating kind of dishes. The bao was light and fluffy, with just the right amount of spring to it. The pork belly was beautifully crispy on the outside, tender and succulent on the inside. The pickled daikon added just the right level of sweetness to each bite, while the sauces on the side meant that you could balance things out just the way you wanted.

The DIY bao on its own is enough of a reason to return to Tokyo Tina. Even if there weren’t 2 other options to try (Vegetarian, Beef Rib Bulgogi), it’d be worth returning just for this one. Sushi is explicitly excluded from the menu at Tokyo Tina but that other favourite, ramen, makes an appearance with a few choices available. This was a really good bowl of ramen. The broth was thick and flavoursome and there was a good balance of noodles to broth to other ingredients. It had a good kick to it and was spicy while not being over the top. I didn’t really know what to think of Tokyo Tina before I arrived. I had a feeling that it wouldn’t be authentic Japanese food on offer and on that point I was right. Tokyo Tina is not a Japanese restaurant. While the food certainly stems from Japanese classics, nearly everything has a twist to it and in most cases, the gamble pays off. I was in the mood for Japanese food this isn’t where I’d be coming but if I didn’t know what I felt like and just wanted some good food in a cool space with great service, I’d happily visit again. Of course, there’s always that DIY bao. I think I’ll be back sooner rather than later.