NEW BUFFALO | Chicagoans may not realize that just around the lake is the fifth largest wine-producing state in the country, Michigan. Southwest Michigan has become a popular weekend destination from Chicago for wine and beer lovers. We visited late last year and were impressed with the rolling landscape and sub-Mediterranean climate, very different to its other Midwestern neighbors.

In fact, this corner of Michigan is located on the 45th parallel – the same as Burgundy and Oregon. Michigan is shaking its reputation of producing sweet wines to more widely enjoyed varietals like pinot noir, chardonnay, and syrah. Most of the quality wine grapes are grown within 25 miles of Lake Michigan. Thanks to “lake effect”, grapes are protected by snow in the winter and benefit from a long summer.

Planning a trip to Southwest Michigan? Check out our beer and wine recommendations below, along with the Wine Trail website to create an itinerary for a weekend to remember. 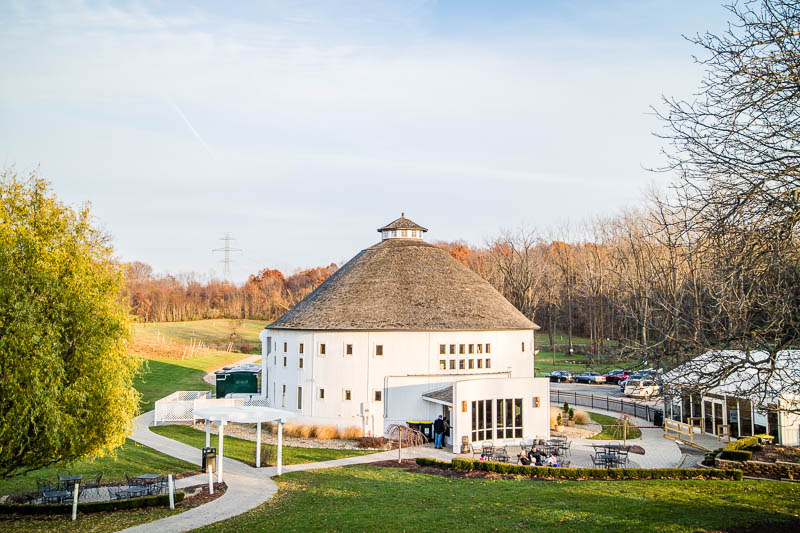 Round Barn Winery, Distillery & Brewery (yes they do all three) is located amongst a beautiful Southwest Michigan countryside backdrop and features an Amish built tasting room, relocated from Indiana’s Amish Country to the winery, as a highlight. Wine tastings, held in the Round Barn, serve groups of up to 15 people with a menu that changes monthly. We recommend reserving your wine tasting ahead of time in order to avoid disappointment. The wine tasting also includes some spirits, and in a surprise for us, we were quite impressed by Round Barn’s smooth ‘Divine’ Vodka.

Conveniently, the brewery and brewpub is located right next door, and here you’ll find a range of core range and seasonal brews. Tabor Hill has a slogan that we agree with “Drink Wine. Laugh Often. Live Long.” Don’t be fooled by the rather unfashionable labels that grace each bottle of wine – Tabor Hill have won several local, regional, and national awards for their wines. When we visited, we enjoyed a relaxing tasting experience with Tabor’s friendly, laid back staff, and were impressed by the variety of styles on offer, and the quality of much of what we tried. Lovers of quality crafted beer should head to Tapistry Brewing, located just a mile from Lake Michigan in Bridgman, Michigan. There are 20 taps showcasing their hand-crafted brews in the taproom, as well as a beer garden to enjoy in the warm months. Across the taps you’ll find an assortment of year-round beers, seasonal brews and one-off creations. We recommend getting a tasting paddle, which lets you choose any five of the beers on tap, the list of which the knowledgeable staff are more than happy to talk you through. Greenbush Brewing Company has built up a reputation over the years for its well balanced, high ABV beers, none of which are less than 6% ABV. From the core range, we like the “Brother Benjamin”, an Imperial IPA balanced with local honey, and the “Red Bud”, an unusual but tasty copper wheat ale.

If you want something that’s not part of the core range, check out the constantly rotating selection of seasonal, rare, and “experimental lab beers”. Food here is no afterthought either, with the menu featuring a range of house smoked meats and other food designed to go well with beer. The Stray Dog Bar & Grill has been providing locals and visitors to the Southwest Michigan town of New Buffalo a fun, casual, family friendly space in which to chill out and socialise for over 15 years. When the weather is good, there’s a spacious rooftop terrace to enjoy the views of Lake Michigan.

Beer Church Brewing Co. have one of the more interesting homes on this list – a restored 1861 Civil War era church. On the 1945 wood altar (now located in the entryway), you’ll find taps pouring Beer Church’s beers, which are currently only available here. Head brewer Nate Peck ensure the core range is brewed to standard, while creating seasonal single batch releases too. While much of the original church has been retained, new additions include things like televisions for live sports and an Italian wood-fired pizza oven to help ensure some tasty food options are offered. Shoreline Brewery is a family-owned and independently run brewery that opened in August 2005, and over the past 12 years it’s built a reputation for creating quality beers. It’s a large space, that’s relaxed, welcoming, and family-friendly. The brewery always has 12 beers on tap, and offers tasters for those who aren’t sure what they want. Popular beers include the award-winning Beltaine Scottish Ale and seasonal Stellar Blue blueberry ale. Personally, we are partial to the Curse The Goat, served each year on the Cubs home opener.

Yes it’s technically in Indiana, but no trip to Southwest Michigan should be complete without a visit to this border town spot.